Latest News
As April setting down, get ready Xbox Live Gold and Game Pass Ultimate subscribers for a new batch of freebies in May. Microsoft has revealed the four games–two Xbox One, two Xbox 360–you’ll be able to catch in May.

Next month’s games will roll out  with racing game V-Rally 4 for Xbox One and retro soccer sim Sensible World of Soccer for Xbox 360 and Xbox One. 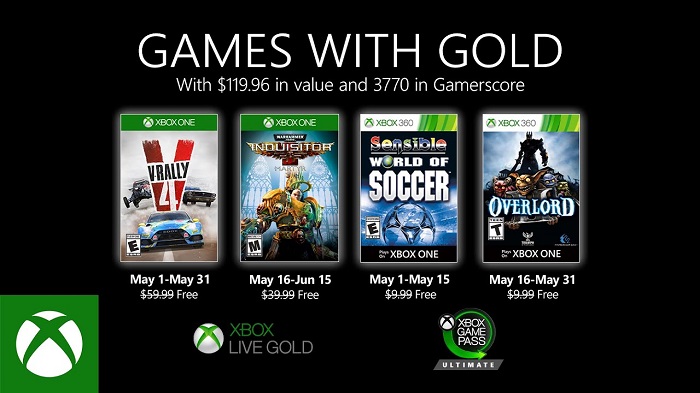 Coming later are a pair of action-role-playing games: Warhammer 40,000: Inquisitor – Martyr and Overlord 2. Here’s the full rundown of May 2020’s Games with Gold titles:

From 1 May to 15 May , you can snatch Sensible World of Soccer, an enhanced Xbox 360 version of the top-down ’90s soccer game. Sensible World of Soccer originally released on the Amiga. Though the on-the-field gameplay is simplistic, it has a fairly robust club management system, especially when you consider it launched in 1994. If you’re not into sports or racing, the Diablo-esque Warhammer 40,000: Inquisitor – Martyr for Xbox One will be available from 16 May to 15June. The story-driven campaign is set in the 41st millennium amidst a large-scale war and can be played either solo or cooperatively with up to four players. You can also head back to 2009 from May 16 to May 31 with Overlord 2, a decent Xbox 360 action-RPG in the now-defunct series.