In a world where you are constantly bombarded with ads, be it on mobile or television, it is easy for anyone to get exposed to Real Money Games (RMG) as they entice you with the fact that you can gain more money. However, if one fails to keep a check on their spendings and keep on losing out on the cash, they might become bankrupt which can lead them to commit suicide (as seen in the recent past).

Raising voice against how real money games are causing financial loss to individuals, GOQii and nCore Games founder Vishal Gondal shared a tweet on 9 February which stated: “Rummy, Teen Patti, RMG Fantasy etc are not Skills games. They cause serious financial loss, addiction and death. Gambling is a poison pill served to the society in the garb of a skill game.. stop this!”

Soon he received more than 10 legal notices from individuals across various parts of the country claiming compensation for his tweets defaming the individual’s hobby of playing real money games online.

Responding to the legal notices sent to him, Gondal’s lawyer pointed out that there have been instances of 19 cases of suicide in the last few months after many users lost significant amounts of cash to online gambling portals. Hence, Gondal expressed his opinions and firm opposition to online gambling portals based on these incidents, added Gondal’s lawyer in his response to the legal notices.

I have responded to most of the notices
https://t.co/nekW4aBk9b

A. I have offered to provide them therepy
B. Attached list of 19 suicides in last months due to RMG
Need I do more ?@medianama @newslaundry @Inc42 @TheKenWeb @RajendraGupta @PMOIndia #IndiaAgainstGambling pic.twitter.com/haCp65n60O

Gondal’s lawyers termed the allegation that they have put on Gondal as “unreasonable”. Gondal’s lawyer also highlighted: “Further, a bare perusal of your notice makes it crystal clear that the said notice is a premeditated attempt to harass and/or arm-twist our Client to bow down to your pressure tactics and/or to stop highlighting in the society the wrongful/unlawful activities carried on under the garb of skill of gaming. It appears that your Client has been misled and/or has failed or neglected to provide the correct factual matrix to you which has resulted in issuance of such concocted and vague legal notice to our Client.”

The lawyer also warned that if they failed to send a written apology to Gondal, they would take suitable legal action against the supposed rummy players.

“In light of the aforementioned facts and circumstances, our Client has instructed us to call upon you which we hereby do to withdraw your notice immediately with a written apology to our Client failing which, our Client shall be constrained to initiate appropriate legal proceedings against you including but not limited to damages for the harassment and defamation suffered by our Client,” the Gondal’s lawyer added in the responses.

In addition to this, Gondal has also aimed to organise counselling sessions for persons who send him legal notices. “Further, our Client in good faith is ready and willing to organize counselling sessions for your client taking into consideration the addiction and heavy anxiety caused by playing these Real Money Games which have caused financial loss, severe addiction and loss of life,” the response added along with list of 19 people who have committed suicide after losing money in gambling.

Because of the availability of the real money game online, anybody can access it and that is having a wrong impact on the society. In conversation with Animationxpress Gondal shared,“If there is any game where you have the ability to put in money or multiply or lose it, then that is a gambling/betting/wagering. Since it is happening outside Google or Apple App Stores; kids can download these game and play it, influenced by the celebrity endorsers”

Since the rise of online gaming like Call of Duty Mobile and Free Fire, many are also confused about the fact that even gaming involves in game purchases; so does that come under gambling? No. For example, in the Free Fire game, once you purchase an item, you cannot sell it or return it back. If you buy a chest at Rs 500 and when you see the price has increased to Rs 10,000, and you get to sell it, then that’s gambling. For indulgence in any entertainment, you can feel guilty about why did you indulge? But you are not going to go bankrupt because of that. That is the difference between gambling and gaming.

Because of the confusion, earlier, Andhra Pradesh CM YS Jagan Mohan Reddy had asked Union Minister RS Prasad to block 132 websites in the state, owing to the dangers posed by online gambling and betting which included EA’s official site. EA is one of the biggest and best known game developers globally, best known for its series of sports games like FIFA and NHL as well as mobile games like Bejeweled and SimCity.

Clarifying the confusion, Gondal commented, “Take the example of you going to a movie theatre for entertainment purposes. You watch the movie, buy popcorn and more but after watching the movie you realise that it wasn’t that great.  Here, you will not lose extra money apart from the money already spent and you won’t become bankrupt because of it. The problem with gambling/RMG is that people get addicted. Such addiction is a progressive addiction that can have many negative psychological, physical, and social repercussions. It is classed as an impulse-control disorder. This is what is causing the high rate of crime and suicides related to RMG.”

Not just Gondal, the entire gaming and esports fraternity are raising their voice against RMG . Few days back the Esports Federation of India rolled out a written piece to clarify how esports is different from fantasy sports or RMG. In Gondal’s recent post where he shared the data of the responses, many  have shown their support. 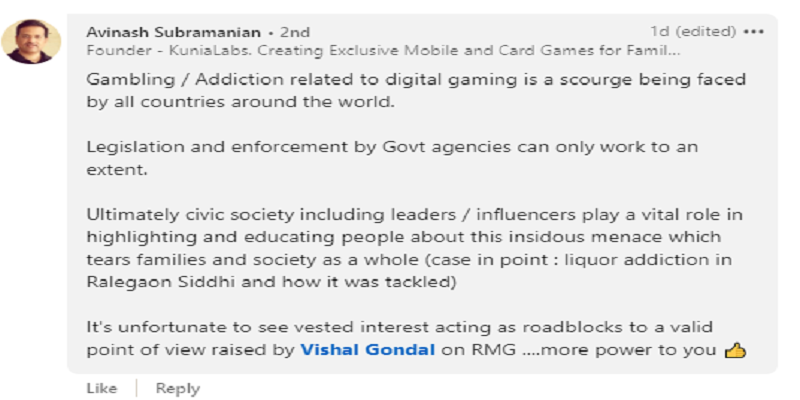 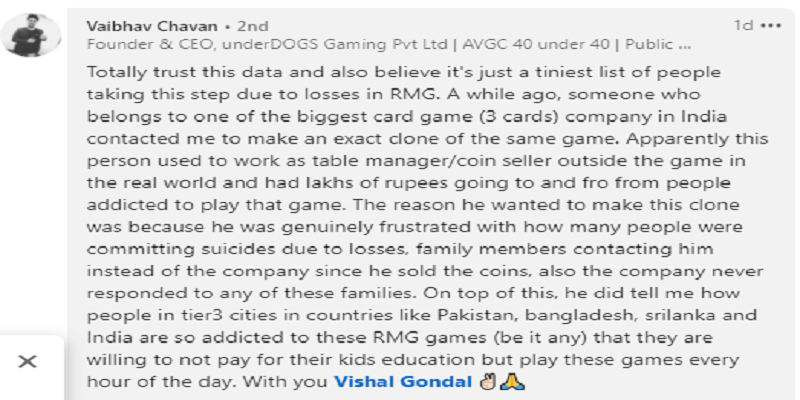 Wasn’t aware that online gambling had led to so many #suicides
Need to check if there is systematic data on this https://t.co/YuVLLDIMrf