2D Animation Animation Latest News
It has been a month to 2020 and the OTT players in India have upped their game of content across different genres, that piques interest and keeps the audience hooked. Since its introduction in India, Amazon Prime Video has delivered premium original content from Mirzapur, Made in Heaven, The First Man, Four More Shots Please and many more. Lately, they launched yet another thought provoking original series, Afsos starring Gulshan Devaiah. Written by popular stand-up comic Anirban Dasgupta along with Dibya Chatterjee, Afsos, opens with a weirdly amazing title design crafted smartly in animation by Mumbai based animator and visual artist Mihir Lele. 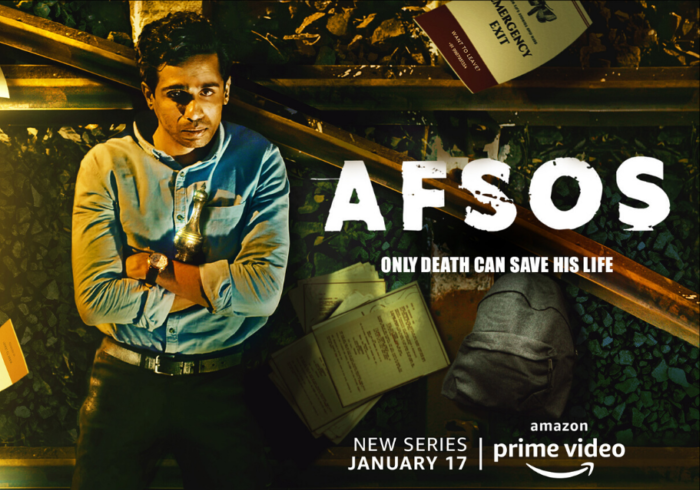 After Netflix’s Lust Stories, Leila and several others have adopted animation for the title designing. Dasgupta mentioned, “It just felt right and doable. We didn’t have much resources and finances, so we bet on animation as it’s an effective and eye-grabbing medium.” Based on a Bengali novel, Golper Goru Chaande (which translates to ‘The cow of fiction goes to the Moon’), Afsos tells the story of a disillusioned man “who wants to die but is unable to because he could be immortal.” The title design aptly depicts the confusion and desperation to end his life, leading to hiring an assassin to do the job for him.  Speaking about the conceptualisation, Lele shared with AnimationXpress, “I got a call from Dasgupta in November 2018 regarding a project, which he narrated with sheer excitement and passion. This was one of the primary reasons I got on board besides the terrific premise of Afsos. After that I read the script of all the eight episodes and came up with seven diferent concepts, all adhered to the theme and dark mood of the show. 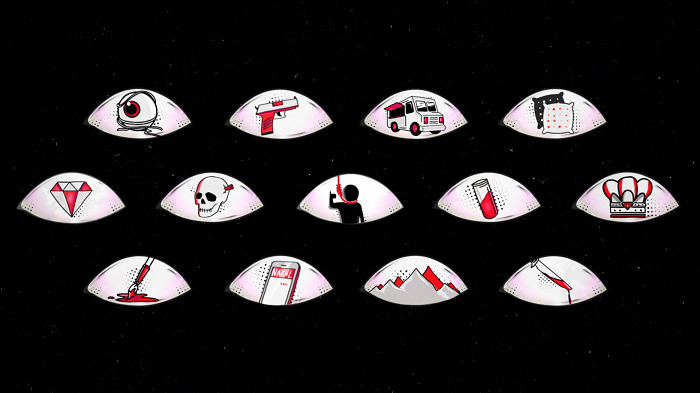 After several discussions along with Dasgupta, Chatterjee, Anubhuti Kasyap (director) and Shraddha (post head of the show), two concepts were shortlisted, and the team unanimously selected the ‘eye-blinking’ concept which I pitched to them. We then discussed the finer details of the actions that were to be animated, the duration of the packaging and its treatment. We then moved onto the storyboard and I began working on the animatic. The music by Neel Adhikari almost organically fits the visuals and helped get a sense of the mood and certain actions were devised to play well with the music.” Lele then worked on the animatic with the aim to give an exact sense of treatment, timing and action for immediate clarity. The animatic was then dissected thoroughly and we went through a couple of rounds of changes to arrive at one sequence, that incorporated all the smaller details and feedback from the team. 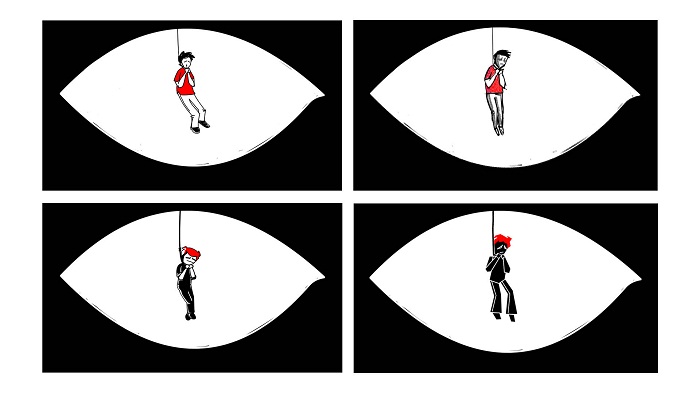 The entire packaging of the title has been a collaboration between five of them, and all of them focused on minute details at every stage of the process. Since Dasgupta and Chatterjee had been associated with the story for the longest, they had specific ideas for certain visuals that would work in some places to enhance the packaging, like adding a little turtle in one place because it’s in the show and many more. Afsos deals with extremely serious issues like death and suicide, but adopts a light hearted approach in doing so, and Lele decided to dabble in an organic, grungy but visually stark kind of treatment since the nature of the show was dark but comic. Lele started working on it in December 2018 and by the second week of February 2019, he had the first draft of the animatic ready. Character Designs and final treatment were locked by the end of February while the tweaking of the animatic happened side by side.  Added he, “A dark comedy is such a rare genre to be explored, especially in India, I wanted to do full justice to the opportunity. So, I chose 2D hand drawn animation, coupled with a combination of watercolor textures, some grunge and rough outlines to keep the overall treatment organic, but also show extremely graphic imagery without making it too sombre. For the colours, I decided to go with a stark black and white, with red as an accent colour, for the characters and key elements. I wanted to keep it simple yet detailed. I began animating by the beginning of March 2019 and by the 16 March I had delivered the sequence. The rest of the month, I worked on tweaking the timing, including credits, playing with the textures, and more to enhance the look.” Lele did major character animation in Adobe Animate, while smaller animation, camera movements and all of the compositing was done in After Effects. The textures and most of the elements were designed and illustrated in Photoshop. Dasgupta approached Lele even before Afsos went on floors. Informed he, “Our initial idea was a cockroach based animation with variable outcomes for different episodes. It was an ambitious idea but somehow didn’t work out. We absolutely loved the current title animation with the perfect music, and I have been tripping on it ever since. It was a great experience and Amazon gave us full freedom to do it.” Lele concluded, “This has been one of my most fulfilling creative collaborations. It is refreshing and extremely encouraging to work with creators like these, who want to collaborate and get the best out of somebody rather than have someone execute an idea they have without much exploration. It helps one grow creatively and in the process, also create something they can be proud of. The first day I met Dasgupta, he started by saying that the show has one brief- that there is NO brief. Just go wild because we too have, while writing this script”. It is rare to get such opportunities and I’m truly thankful for it.” With new shows coming on OTT platforms almost every week, there’s a whole library of visual references and styles to draw attention of the audience. It’s great to see creators invest in a well crafted, well designed title sequence in animation, exploring different concepts, styles and mediums.


NEW WORK ALERT! My first title sequence for a webseries! For @primevideoin ‘s Afsos, @anirbandasgupta5 and @dibya.chatterjee put full faith in me to design a packaging that would do justice to the mood of the show and in a way, also capture the essence of the story in 30 odd seconds. Thank you for the opportunity and I hope I was able to do justice to the amazing show that you’ll have created! Very proud to be a part of the team, and what they’ve created. @shraddhasarfare thank you for always helping me push my boundaries! Full project up on my website! Link in bio! ?? Afsos is now streaming on Amazon prime video worldwide! Please to watch and not skip the intro (it’s only 30 seconds) thank you! @gulshandevaiah78 @anjalipatilofficial @anubhuti_k @prernasaigal @souravghosh87 . . . #opening sequence #webseries #webshow #indianwebseries #2danimation #characterdesign #animationsequence #darkcomedy #animation #titlesequence #artofthetitle #design #indiananimation