Has it ever happened that you have too many aspirations and you end up choosing one and later in life decide to pursue some others as well? This has been the case with the founders of the cloud collaboration platform – Gamedoora and Ravishankar Venkateswaran – the director of the first ever crowdsourced sanskrit animated film ‘Punyakoti’. The question which arises is how are Gamedoora and Punyakoti related?

Gamedoora, a two months old open source cloud based collaborative platform, is an exclusive platform for gaming and animation studios. Whereas Punyakoti is a crowdfunded and crowdsourced animated film that’s been made on a tight budget by an HR professional and not an animation studio, wherein the artists involved in bringing the project live are spread across the country. Using a cloud computing provider is common in the animation industry as many projects are distributed to a studio’s branches or are being outsourced. However, these providers mostly come with a fee, something which can be heavy on the pockets for a project like Punyakoti.

Here’s where Gamedoora came to the rescue as it helps enthusiasts to access new projects, showcase their work and passion towards a concept, game, story line and final production and commercialisation. Gamedoora is built to revitalise the game/animation production pipeline and serve passionate creative enthusiasts build great new content/games with their own community in an open source landscape. 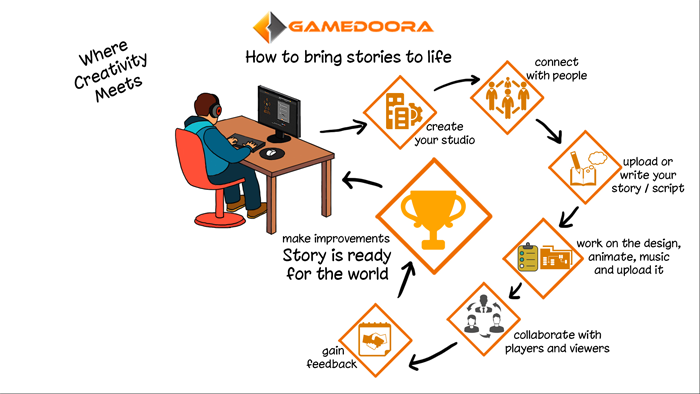 The production for Punyakoti started in September, 2015. Back then Gamedoora was in its concept stages. “Currently we are a team of 30 who are based in different parts of the country. So far we have managed to complete 50 per cent of the production and are planning to complete the rest in the coming four months. Till May/June, excel sheets, WeTransfer, Google docs, emails were used as mediums to inform everyone the progress on storyboards, layouts, clean-ups, animatics etc,” says Venkateswaran. “Production warehouse is important in these kind of projects and the way we functioned earlier led to a lot of confusion, resulting in me working as a software who had to keep a track of all the happenings. That’s where Gamedoora helped us. What set it apart from rest of the providers was not just the fact that it’s available for free, but also that we were given Skype training to understand its functioning.”

There are four co-founders of Gamedoora; Devang Parikh, Chirag Shah, Ravish Mody and Ravi Dave. Each one hails from the IT background with Parikh being an industry managerial, Shah from operations side, Mody from IT design and Dave from IT infrastructure. Parikh being a passionate and creative person held a leadership position at the Animation Society of India and helped the community. Shah is a result oriented leader with over 15 years of experience, Mody is a core developer and passionate internet entrepreneur, designer, coder and innovative individual with over 9 years of experience whereas Dave is a core gamer and IT person who makes sure that the IT spine is working fine, with over 8 years of industry experience in the field.

How did these two get associated? Devang Parikh contributed to Punyakoti project while it was listed on the crowdsourcing platform, Wishberry. Being one of the contributors, he was eager to know how far has the movie progressed and gave a call to Venkateswaran in March or April. That’s when it dawned upon him the idea of collaboration of Gamedoora and Punyakoti.

“Currently there are 75 to 80 members registered on our platform. Punyakoti and Gamedoora stands on the same philosophy and that’s why this collaboration is just perfect,” explains Parikh. “The platform allows one to create their own public or private studio to bring the story to life. Associating with a project like Punyakoti will help us get feedback from the industry itself which will lead to tweaking our platform and making it a better place for animators, developers, musicians, illustrators to create, connect and collaborate with one another.”

At present, the platform is available free of cost as the founders want to build a community primarily. As the name suggests, the platform does not restrict itself just for the gaming community. The word ‘game’ has been used because of the fact that in games all three elements are involved: animation, music and gameplay.

Venkateswaran commented, “Gamedoora has a great potential to become big as its free as of now. The experience that it’s providing is good and as more people join in, it will become more refined. Over the Skype conversation, Parikh helped us understand the platform as for many animators didn’t know few functions of it. At least 10,000 animators should be present on Gamedoora to help the industry professionals to connect with them instead of browsing through their LinkedIn profiles.”

As for Punyakoti, the current budget of the film is Rs 50 lacs and needs another Rs 1 crore investment to make the film happen. “The current animation industry has become cynical about the Indian animation industry. Big animation studios are working as commercial houses and are not focusing on the power of storytelling. This is what needs to be changed. If International studios can make it big, then why can’t we? That’s why I want all animators to work on Punyakoti as it’s a tribute and an attempt to restore pride in Indian culture and heritage. This is one of the most relaxed projects with no deadlines attached, allowing animators to put their best foot forward,” asserts Venkateswaran.

Built on the same ideology of bringing the creative community together, both Gamedoora and Punyakoti have a single objective in mind. And seeing the dedication and passion behind both – the open sourced cloud based collaborative platform and the first crowdsourced sanskrit animated film – there’s a little to doubt about the success of these two.