As kids brave the testing times by staying at home, kids channel, Sony YAY! has come up with exciting plans for them. This World Music Day which was on 21 June, the channel launched a new, hope instilling song – Phir Dil Bolega YAY!

Music is known to give wings to one’s imagination. Transcending boundaries and languages, music has the potential to bring people closer and spread happiness and amongst them. Especially for kids across age groups, the musical notes of nursery rhymes, jingles and songs take absolutely no time to bring a smile on their face. 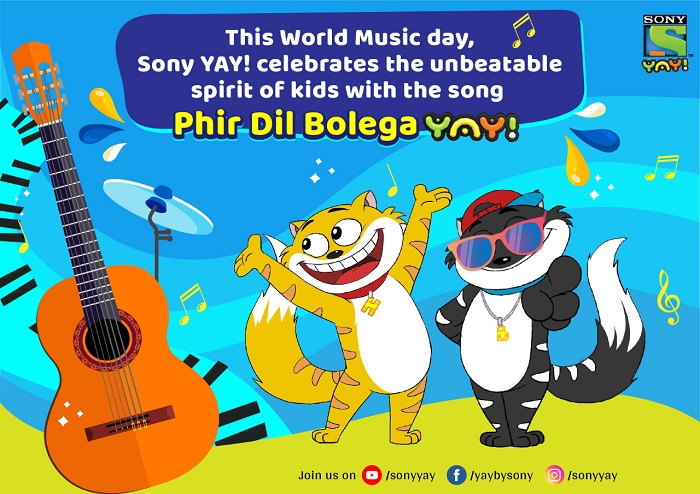 Through this special song, Sony YAY! intended to laud the patience of the kids and give them a hopeful sneak peek of the playful days that lie ahead. The song showcases an unusual narrative from acknowledging the struggle of kids in the current situation to innovative and fun-filled ways to overcome boredom. The phrase “Dil bolega YAY!” speaks of optimism and is a perfect song to uplift their mood.

Sony Pictures Networks India Kids’ Genre business head Leena Lele Dutta commented, “Kids are undoubtedly the centre of everything that we do and it’s impressive how kids across the country have put such a brave face during the on-going situation. There is nothing better than music to elevate the mood and hence we have created this uplifting song for our little fans to up their morale. There would have been no better day than the World Music Day to launch the same and instil the sense of hope in them for the fun days to come”

Echoing the same sentiment, popular singers like Aftab Singh, Arvind Vegda, MC Sanna, came together to support the channel in this initiative by creating their own rendition of the song Phir Dil Bolega YAY!