Animation Latest News
Kids broadcaster Sonic, part of Nickelodeon has announced to be airing new episodes of Ninja Hattori from today, 29 June, to make the monsoon exciting for kids. The channel took to its official Instagram account to post about the news.  As the pandemic and the lockdown continues, and with Maharashtra CM Uddhav Thackeray announcing that lockdown in red and containment zones may continue after  30 June, schools and educational institutes will remain closed.

Thus, kids will have to be homebound for some more time now. Hence, kids broadcasters have focused on bringing fresh content for kids’ favourite shows to keep them occupied and entertained during these tough times.  Created by Fujiko A. Fujio, manga series Ninja Hattori-Kun, was later adapted into an animated TV series that revolves around 11-year-old Kenichi Mitsuba, a stubborn, lazy, average secondary school student who struggles with his studies, and ends up frustrating his parents and teacher always.  A little ninja, Hattori Kanzo, befriends Kenichi and helps him with his problems, and constantly keeps an eye on him, as a good friend. To his annoyance, he finds Kenichi always looking for easy ways of things. 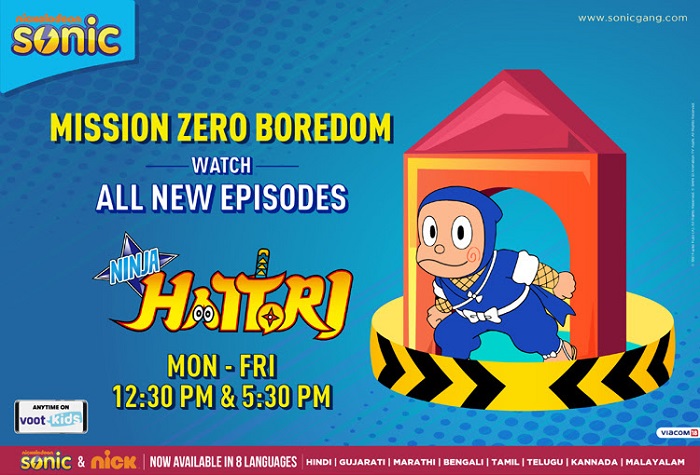 Earlier in December 2018, Japan’s private broadcaster TV Asahi and its animation production arm Shin-ei animation, teamed up with Green Gold Animation to create all-new episodes of Ninja Hattori.  This action comedy animation franchise is presently running over three decades with a large number of followers in Japan, India and countries worldwide. Ninja Hattori new episodes will air from Monday to Friday at 12:30 pm and 5:30 pm on Sonic and is also available on VOOT Kids.