This initiative is to bring BISFF into the living rooms across India and the globe, amid the pandemic so that the audience can experience the festival excitement from the comfort of their own home.

ShortsTV, available across major DTH platforms in India, will showcase this year’s ‘Indian Competition Section’ of BISFF for the first time on Indian television on 16 August, broadcasting the finalist films and announcing the winners ‘live’ on air. 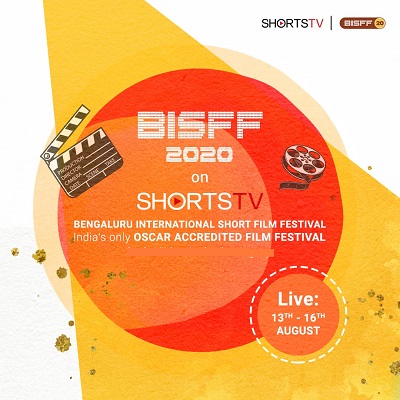 Commenting on this initiative, ShortsTV chief executive Carter Pilcher said, “ShortsTV has been the exclusive international distributor of the Oscar Nominated Short Films theatrical releases for the last 15 years and the industry-advocate for short-form creators and distributors. The Oscar-accredited festival, for the Bengaluru International Short Film Festival (BISFF), that represents one of India’s best chances to bring home an Oscar, has finally gotten India into the game. We are thrilled to be bringing this important festival to audiences across India – and the world. There’s a long and exciting road ahead this year starting on 16 August when ShortsTV and BISFF announce the winner, but it all leads to the Oscars telecast in April!”

Earlier this year, ShortsTV launched a global effort across all of its international TV Networks in the U.S., South Asia, Europe and Latin America to turn them over to key film festivals in each region affected by the pandemic, ensuring filmmakers and their films will be seen and expanding the audience for each festival.

BISFF, successfully running for 10 years, is India’s most important short film festival as it is the first and only Oscar-accredited festival. The winner will directly qualify for Oscar consideration, taking a first step in the world’s most exciting and prestigious journey of filmmaking competition.  The festival will be held between 13 to 16 August, 2020, and ShortsTV will be premiering the 16 finalist films from August 12 to 16, 2020 during five nights of televised specials commencing each night at 8pm. Each night will feature the screening of some finalist films followed by “Filmmaker Spotlight”, featuring exclusive interviews with each film’s creators giving behind-the-scenes insight into the film-making process of their contender. The winning film and the two runner-up films will be announced and screened again in the finale on 16 August, 2020.

BISFF Director Anand Varadaraj added, “We were excited to announce our first year as the only Oscar accredited film festival in India. We were always a theater screening only festival, however, due to the pandemic, we are forced to move to online screenings. We are thrilled that with our partnership with ShortsTV, we are now able to celebrate the festival with the same enthusiasm by reaching to the Indian diaspora and taking it further to a global audience”