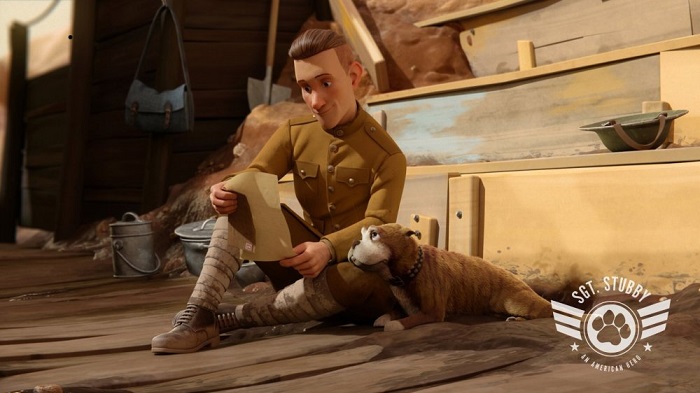 The 2nd Annual Palm Springs International Animation Festival and Expo has announced its extensive list of Audience Choice Award winners, with Richard Lanni’s Sgt. Stubby: An American Hero taking the prize for Best Animated Feature. Perry Chen’s Changyou’s Journey, Florian Brauch’s Hybrids and Nikita Diakur’s Ugly are among the 40 short films selected as winners in a wide range of technical and thematic categories by audiences during the three-day festival.

Directed and written by Richard Lanni, Sgt.Stubby was based on real-life Staffordshire bull terrier of the same name, chronicling his heroics during the World War I. For all its valiance and courage, it is still identified as the most recognised dog in America’s history, and the only canine to have ever been promoted to the rank of Sergeant in US Army till date.

Produced by Fun Academy Motion Pictures, Sgt. Stubby was animated by Mikros Animation and was not only received to encouraging response from its viewers, but also grossed $25 million at the box-office against a meagre budget of $3.5 million, thereby becoming a commercial hit too.

This year, the festival, held at the historic Camelot Theater, now known as the Palm Springs Cultural Center, partnered with Comic-Con Palm Springs (CCPS), screening 10 features and 250 short films from 103 countries, in addition to hosting a number of panels, masterclasses and live animation demonstrations. Brian Neil Hoff, the festival’s founder and director, and Chris Spellman, founder of Comic Con Palm Springs, combined their audiences to bring some of the top comic book and animation artists to the Coachella Valley for the five-day event.

The Audience Choice awards were given out in 40 short film and one animated feature category.

During the festival, autistic animator Dani Bowman hosted the Academy of Dream awards panel, featuring animators with disabilities, who share their powerful stories of challenges and overcoming the odds to create their animated films.

The festival also featured a masterclass with DreamWorks animator Cinzia Angelini, who shared with the audience her international co-op project Mila, which combines the work of over 350 artists from 35 countries working remotely to create the powerful animated short film.