A new comic book, Priya’s Shakti, which presents a new Indian hero who tackles the problem of sexual violence in India and around the world, is premiering at the Mumbai Film and Comics Convention from December 19-21 2014. Creators Ram Devineni and Dan Goldman will be presenting the innovative comic book that uses the leading augmented reality App Blippar to bring animation, videos, real-life stories, and other interactive elements to life.

“Talking with several rape survivors, I realised how difficult it was for them to get justice. Often, they do not report crimes out of fear for their lives, or to avoid the backlash they may face from their family, authorities, and community. The burden of shame is placed on the victim and not the perpetrators. Priya’s Shakti highlights the threat of sexual harassment and violence that women face on a daily basis unless deeply rooted patriarchal norms are challenged. Priya is a new hero for a modern India,” said Ram. 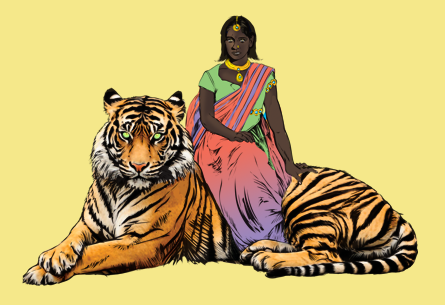 Inspired by ancient mythological tales, the comic book tells the story of Priya, a mortal woman and gang-rape survivor and the Goddess Parvati, as they fight against gender-based sexual violence in India and around the world supporting the movement against patriarchy, misogyny and indifference.

The project’s non-profit engagement partner is Apne Aap Women Worldwide – one of the world’s leading NGOs supporting at-risk girls and women in India and the US by ensuring them access to their rights and working for policy and social change.  “Partnering with Apne Aap will ensure our project will become a strategic platform to support the global movement against gender-based violence, and that our comic book will have maximum reach with youth in India, the US and around the world. Through this collaboration, we are working to build a movement around Priya as a modern Indian hero within the larger global movement by creating shared cultural opportunities for education, dialogue, and social action,” expounded the project’s social impact director Lina Srivastava.

In addition to this, several large colourful murals from the comic book are being painted on walls throughout Mumbai. Audiences will be able to unlock special animation and movies that will pop out of the wall when they scan the murals via their smart phones.

“Stories like Priya’s are in the news often these days, not just in India but in all nations and online. With Priya’s Shakti comes the chance to put a symbolic face to this issue and enlighten all genders about sexual violence, and there’s no format better suited to this than the instantly accessible medium of comics,” added Dan Goldman.

Commenting on the launch, Blippar regional director Arnav Ghosh said, “We are excited to collaborate with Priya’s Shakti to introduce India’s first interactive comic who brings forth the burning issue of sexual violence in India. Blippar allows the book to be interactive and helps it connect with the readers by marrying the real and virtual world.”

The comic book will be available free worldwide in every digital format and downloadable on the project’s website and at ComiXology, Apple’s iBooks, Amazon, and BitTorrent. The printed comics will be available at the comic book convention in Hindi and English and eventually will be translated into other languages. Rattapallax, a literary publishing house and film production company based in New York City and New Delhi is producing the entire project.