Kids’ content ecosystem has been hitting an inflection point, making inroads into the high-value entertainment sector with top brands, animators and filmmakers vying to build on millions of bright and eager eyeballs.

The growth trajectory is also further consolidated by both the consumption as well as the animated IP rush which have shot the numbers from average 499 GRP to 550 GRP in the last year. According to the recently launched FICCI EY report, animation segment is estimated to reach at Rs. 24.4 billion by 2021 from Rs. 18.8 billion in 2018.

With an aim to grapple with the vicissitudes of the market and outline the trajectory of the ecosystem, the summit is all set to put the wind in the sails of the kids’ animation scenario. The growing inflow of participation and investment in this sector has necessitated the prospect of sussing out its ebbs and flows and aggregate and get a better understanding of the entire ecosystem. 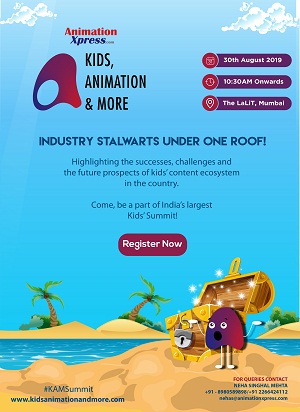 In a bid to galvanise the ecosystem and award the best in the sphere of kids’ content, Animation Xpress is bringing together important players and media experts of the kids’ content industry in a one of a kind event titled ‘Kids, Animation & More (KAM Summit)’ followed by ANN Awards – India’s largest premium, full scale awards in animation and all its aspects on 30 August 2019 at The LaLiT, Mumbai.

Spanning over myriad themes that will range from brand stories, creativity, licensing & merchandising to brand integration; KAM intends to explore multiple major sub-sectors in the industry and how they are aiding in giving shape to the kids’ content scenario in the country.

Indian animation industry is creating content which is making waves across the world. This is the most fitting hour to honour the names behind the groundbreaking animated content being produced. ANN Awards, thus, intends on bringing recognition and setting the bar for the Indian animation industry and many of its aspects. Having been in the business for so many years now, Animation Xpress realised the importance of putting together an event that would encompass all the crucial themes in the kids’ animation ecosystem.

With an aim to play host to prominent linchpins, top subject matter experts, studios, production houses, animators and the best content & projects from all over the country to provide exposure and know-how to the professionals, artists and students, KAM Summit is gearing up to be a full-scale event that Animation Xpress is hoping to make as grand as it gets in its gala offerings.