India is emerging as a leader in esports and video gaming. In addition to that, the Indian digital gaming industry is growing rapidly due to smart phone penetration and cheap Internet. Currently, India stands at a global number 17 in the soon-to-be $1.5 billion video games industry. Estimated to be about $818 million, the Indian video games sector while vastly unstructured, is growing rapidly. Minister of commerce and industry and railways Piyush Goyal, is aiming for a major boost to Indian esports, gaming and AVGC industry declared to open the Nations Cup (International Esports Championship) recently. SEPC will be organising Nations Cup (International Esports Championship) in association with Electronic Sports Federation of India (ESFI) during the Global Exhibition on Services which is being held from 26th-28th November 2019.

The championship to be held at Global Exhibition on Services 2019 in Bengaluru and recently the minister unveiled the Trophy for Nations Cup during the curtain raiser event for GES 2019 which held at ITC Maurya, New Delhi. 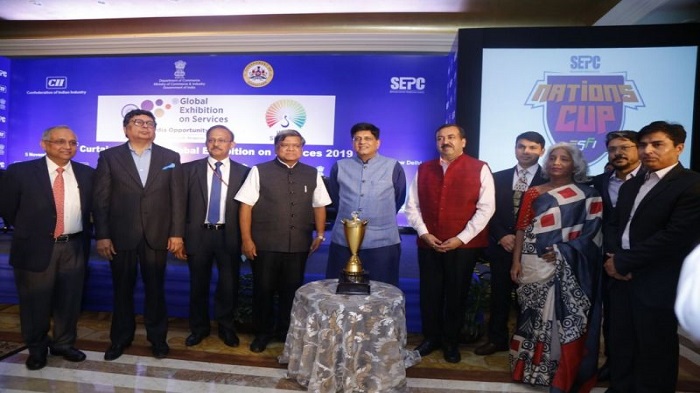 During his launch address to the audience  including Jagdish Shettar -Government of Karnataka minister of large and medium scale industries  and diplomats from various embassies Goyal quoted “I was very delighted to hear the report which was shared in terms of the efforts to bring animation and esports into the country, this is the new age world that India needs to engage with.” The Nations Cup will be one of the key highlights during GES and this event has opened up multiple avenues for the services industry particularly esports, gaming, animation and more. Global Exhibition on Services (GES), the fifth edition of Global Exhibition on Services (GES) 2019 is being organized and supported by Department of Commerce, Ministry of Commerce and Industry, Government of India in partnership with the Services Export Promotion Council (SEPC) and the Confederation of Indian Industry (CII) from 26 to 28 November 2019 at the Palace Grounds, Bengaluru, Karnataka. This event is expected to have participation from about 100 countries and will host focused knowledge sessions and a large number of B2B B2G and B2C meetings.

As part of the Champion Sector under SEPC for Culture & Sports, there will be B2B meetings also aligned for the Indian Esports Companies and Video Game Developers.