Ever experienced how fast is the world moving? Be it technology, work life, lifestyle or mindset. With each day, the pace escalates. When you are a part of it, you are thrilled; but when you look at it as a whole, it is almost, scary. Scary in terms of what though? You can interpret this in your own way after watching the animated short Far The Days Come. This 1:58 minutes short from Pencillati Studios is directed by Ram Singh with his team of artists, and is based on the present state of the world.

After their previous animated short The Bloop Troop, which won the Best Animated Short Film award at 24FPS International Short Film Festival, there has been a total shift in the genre of Far The Days Come. “The primary factor was the idea about this short. Once the idea was established, we went on to decide the style and mood suited to the film,” said the film’s director Ram Singh, who is also the film lead at Pencillati Studios. Animation is a powerful medium of storytelling, he believes. Hence, they keep themselves open to different styles.

The short is based on the current condition that the world is living in. “Each illustration, or shot, represents a different scenario from a different part of the world, and, at instances, all over the world.” Every shot in the film is novel and in itself says something; but when put together, you get the whole picture and the theme that it is based on. “Although there is a brighter side, (through this short) we wanted to address what we are losing in our constant quest for comfort.”

“The title Far The Days Come is a representation of what the film is about. It talks about how far we have come since we lit the first fire.” It was inspired by the soundtrack Far The Days Come by Letter Box, which is the background score also of the film.

The film talks about a lot of elements- jungle, explosions, soldiers, virtual reality, emoji masks, birds and animals, protests, destruction, burnt down money and fighter tanks. “Each of the illustrations is a glimpse at the world today. On the one hand, we see forests being destroyed and on the other, we see the destruction of human life,” explained Singh. So how do these elements connect with each other? What do they have to say in common? “They talk about a struggle for existence which has become the order of the day, pushing our natural state of happiness to the back. Today we show happiness through smileys and emojis and seek a better world in virtual reality while waging war and destruction on the planet we call home.” 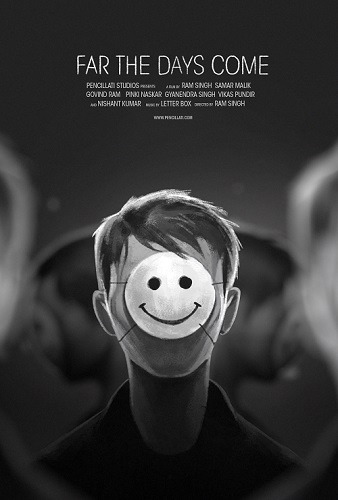 A tree fell and that was when man discovered fire. He used fire in various ways to comfort himself and soon, it turned into a need. As the time passed, we used fire to cause destruction, killed more trees, and found our comfort therein. The source of our comfort has changed. Singh beautifully put it: “In pursuit of greater power and comfort, the destruction which we bring to the world will bring us back to where we stood first.” That is how the world has (or soon will) come a full circle.

This short animated film has narrowed down the various world issues that we are dealing with as a race. “With so much happening around us,” Singh said, “the inspiration was always there.”

Communicating a social issue through animation is a task. Depicting it all (or what is relevant) through illustrations becomes a test. “The entire team had come together to discuss the idea and approach,” observed art lead Samar Malik. “Once the idea for the tonality of presentation was clear, the illustrations were pretty much what we wanted them to be.”

Once the idea for the film was decided, the team started working on the mood and style that was suitable for the film. “We knew we wanted to add drama and grunge, and as we were visualising, there were a lot of colourless blurs and foggy imagery popping up,” Singh recalled. That is how they felt that monochrome would do justice to the film.

During a period of five weeks that the film was made, challenges were no less. One of the greatest was the consistency in the illustrations made by different artists. Another challenge was that, not all the artists involved in the project had a background in animation. Hence, it took several attempts to get the desired results.

Far The Days Come leaves you with a few thoughts that are triggered by the things we read about every day in the newspaper. When asked what message he would like to give through this film, Singh answered, “If it makes you stop and think about your contribution towards the world, good or bad, that fulfills the purpose of this film.”