Upper Deck and the Overwatch League has announced a multi-year deal for licensed collectables that includes the official esports league trading card release as well as stickers, sticker books, prints, posters and memorabilia.  The collaboration with the Overwatch League marks the first venture into esports for Upper Deck. 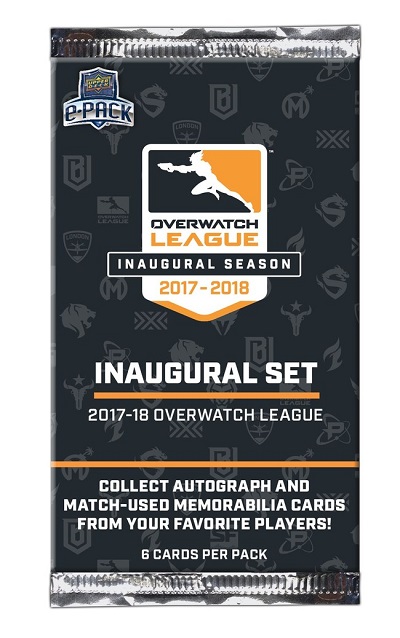 “Collaborating with Upper Deck allows the Overwatch League to offer fans everywhere the opportunity to collect and trade exclusive cards and collectables—featuring their favourite teams and players—that can be cherished for years to come. This is an awesome milestone for our companies, and for esports as a whole,” said Blizzard Entertainment, head of esports licensing Daniel Siegel. ”

Overwatch League fans will now be able to buy, open, collect, and trade cards with other collectors across the globe through Upper Deck e-Pack, the patent-pending platform that allows fans to easily access trading card packs from anywhere in the world using a smartphone, tablet, or computer. What makes the e-Pack system truly unique is the ability for users to get actual physical versions of cards sent directly to them at any time.

“We are excited to collaborate with the Overwatch League for our first esports deal and to deliver new products to Overwatch League fans. This is a great way to celebrate Upper Deck’s 30th anniversary, and we look forward to working with the talented team at Activision Blizzard for many years to come,” said Upper Deck president Jason Masherah.

The first Overwatch League-licensed trading card set will release on 19 June 2019, on Upper Deck e-Pack official site and will showcase fan-favourite players and teams from the league’s inaugural season. Highlights include rare cards autographed by multiple players, cards featuring key moments from the 2018 season, and cards incorporating other league memorabilia. Through the e-Pack platform, collectors will also be introduced to an extensive achievement system where they can earn exclusive avatars, relic shadowbox cards featuring match-used equipment, autographed jerseys, multi-player booklet cards, and more.

Attendees at the upcoming Overwatch League 2019 All-Stars events will be treated to sneak-preview promo packs of the highly anticipated Overwatch League trading card release and will have the opportunity to jumpstart their digital collection with two exclusive All-Star themed hero cards available for a limited time via a QR code located in the sample packs.