Since his creation in the early 1940s, the Joker has been one of the most iconic villains ever designed for a comic book, so much so that his appearance in movies and games have served to glorify the cult. Yet, despite the character’s fame and storied history, there are a few mysteries that are left unresolved like his true identity, his back story and who actually created him.

But wait, there’s more; DC’s Geoff Johns seemed fit to drop the biggest cliffhanger on their comic readers as seen in Justice League #42, which caused a tidal wave of mixed reactions from it fans. This comic posed as an enigma, while telling a very clever story about who the Joker really is. The narrative reveals the events that follow Batman now having the ability to sit in the Mobius chair and ask questions. 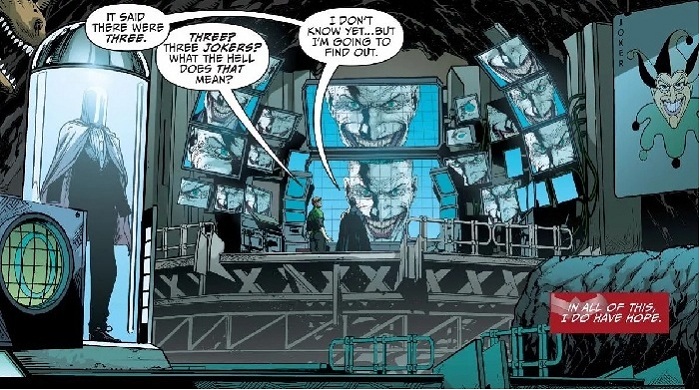 All seems to go well as the chair answers each question correctly, until the final question about the Joker reveals that there were three like him in all. This answer baffled the Dark Knight as much as it did the readers, which now simply adds to a mystery that continues to remain unresolved.

What about his back story? The evidence in the comic books that claim who the Joker was before he became the Clown Prince of Crime, appears to be another sinister plot by the writers. Before the introduction of the comic The Killing Joke, there was no story about his origins; he just existed. The comic book illustrates a failed, grief struck comedian, who had lost his pregnant wife in a car accident and is later tricked in to a crime at a factory in which he previously worked in. While trying to escape from the police and Batman, he slips and falls into a vat of chemicals, only to emerge as a disfigured man with a sadistic laugh.

The only requisite evidence of his name that is widely accepted by fans is Jack Napier, but that is also simply a speculation. In fact, in both Dark Knight movie and comics, the Joker points out that his memory is fuzzy and doesn’t really remember who he was before, as he constantly changes his story about how he got his scars.

The concept and creation of the character is still a topic up for debate amongst comic historians. The Joker is currently known to be created by either Bill Finger and Bob Kane, Bob Kane and Jerry Robinson, Jerry Robinson and Bill Finger or only Bob Kane. Each artist had their own story of who came up with the idea for the villain and had constantly battled each other for its credit. Though it is largely believed that it was Jerry Robinson who was responsible for the Joker’s creation and Bill Finger for the characters development, unfortunately Kane, Finger and Robinson have passed away, leaving the story unresolved.

Although there is plenty of doubt and mystery present in the creation of the Joker, most fans prefer it to be this way, as it allows the character to remain diverse, unpredictable and contradictory to DC fans globally.