The third day of Indian Group Stage for PUBG Mobile Club Open 2020 Spring Split concluded yesterday. A total of 32 teams have participated in the Group Stage and Orange Rock managed to secure the top spot with 134 points, 47 kills, and 3 Chicken Dinners. 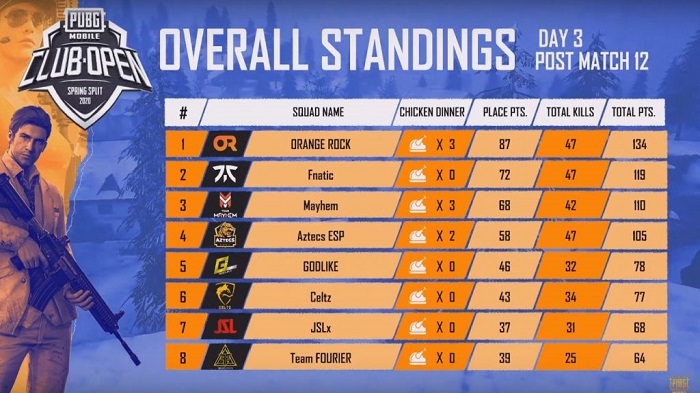 Four matches were played with the first one kicking off at Erangel. Aztec ESP dominated right from the start and was pit against Orange Rock for a final run at that chicken dinner. With a major man advantage, Aztec ESP took down Daljitsk, the last remaining fighter of OR and bagged that prestigious chicken dinner with an impressive total of 17 kills. Match MVP was awarded to AztecKILLSOME as he managed to kill six other pros dealing a total of 836 damage.

The Group Stage still has three more days left and final rankings in the overall standings will change on February 12. The matches will be live-streamed on the official PUBG Mobile Esports YouTube channel along with the South Asian Group Stage.