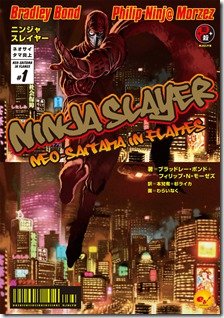 The anime voiceover and music company Starchild recently announced that ‘Ninja Slayer’, a graphic novel that originated via Twitter and sold over 300,000 units (published by Kadokawa Enterbrain), will now be getting animated by the renowned animation company Studio Trigger.

‘Ninja Slayer’ was originally scribed by a pair of American authors and was translated into Japanese and uploaded onto Twitter in 2010. The comic soon became an underground hit, culminating into the publication of the graphic novel in 2012.

The story revolves around Kenji Fujikido, who is a salary man whose wife and child were killed in a ninja turf war. In a brush with his own death, Fujikido is possessed by an enigmatic ninja soul known as Naraku Ninja. Fujikido cheats death and becomes “Ninja Slayer” – a Grim Reaper destined to kill evil ninja, committed to a personal war of vengeance. Set in the dystopian underworld of Neo-Saitama, Ninja Slayer takes on SoukaiSyndicate ninja in mortal combat.

The anime will be produced by Studio Trigger, the same studio that created the anime series KILL la KILL. The world premiere of the promotional trailer will be shown at anime’s biggest convention, Anime Expo 2014 in Los Angeles, CA on 3 July.