Walt Disney nowadays is making a routine of taking some of its better-remembered animated classics and breathing new life into them by developing new live-action versions of the classic films.

One of its most victorious efforts has been the live-action origin story of the Sleeping Beauty villain Maleficent.

Disney is currently in the process of trying to evoke some of that same magic from the classic tale of a boy raised in the jungle with their live-action version of The Jungle Book. 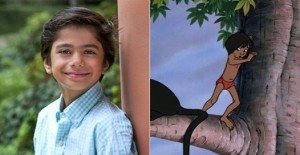 Finally, the search for ‘Mowgli’ in the adaptation has come to an end, with the 10-year-old Indian origin boy, Neel Sethi set to swing from tree to tree on the big screen, as reported by The Hollywood Reporter.

Sethi, a novice from New York, will portray the young boy who is raised by jungle animals in the film, which would be helmed by Jon Favreau and scripted by Justin Marks.

The last Jungle Book film, also by Disney, was an animation, all characters, and had a double release in India; the second was a dubbed version in Hindi.

Neel will be the only human in the film; all other characters – such as Bagheera, the leopard; Shere Khan, the tiger; Kaa, the python; and Baloo, the bear – will be CGI.

The Jungle Book is scheduled to be released on 9 October, 2015.