A young girl overhears her grandmother asking her pregnant mother to abort the child if it is a girl. When the young girl learns what it means, she makes it her mission to convince her grandmother that a girl is no less than a boy and that it is a crime to take away the life of a child in the womb.

Animation as a medium is powerful, and this is not new. What is new is how studios in India are using this power to influence the society and bring about a positive change. Girgit Studios is one such studio that made an animated short Muskaan on female foeticide and gender equality, for Mansi Sahay Thakur, the district magistrate of Bilaspur district, Himachal Pradesh, who was spearheading a campaign called ‘Muskaan’ for the same cause.

Thakur and the DMs of neighbouring districts were organising seminars and workshops with communities to sensitise them on the issue. Though animation as a medium struck her owing to its connection with the youth, when she approached Girgit Studios, she was convinced that the visual uniqueness that it offers will grab the attention of the elder audience too.

For ideation, the team gathered articles, consulted activists, writers and psychologists to understand the subject of female foeticide in context of Himachal Pradesh. “We brainstormed on possible reasons of why people indulge in this act,” said Girgit Studios, co-founder, Swarup Deb. “We listed all the reasons and systematically tried to counter each one in our story.” They concluded that the core message for the youth needed to be gender equality in context of female foeticide. Commissioned by Directorate of Women and Child Development (DWCD), Government of Himachal Pradesh and funded by ACC cement, the film was made to equip the youngsters with answers to all the prejudices thrown at them by their family to discard a girl child when they would become parents, so that they’d fight back.

The design team at the studio visited a couple of districts in Himachal Pradesh for visual research and also interacted with locals to gauge their awareness on the issue. “We documented the clothing, architecture and environment of the regions. Before the research trip we had the plot ready, so we could look for specific references for the film,” Deb explained. A few characters in the story were inspired by the people they met during the trip. There were girls pursuing NCC in one of the colleges and many girls in the schools aspired to become police officers. “This inspired the character of Ranjana and the lady police officer in the film.”

The film was meant to be shown to students of senior secondary schools and colleges followed by discussions and interaction. It was also to be shown in various community workshops conducted by Thakur and her team. The studio hence made sure that there was a character in the story that everyone in the audience could relate to. “While younger school kids had Muskaan and Tunnu to relate with, Ranjana was meant to be role model for college girls. Rajesh (Muskaan’s college going uncle) was included to represent the young men who need to step-up and express their respect for women,” Deb elucidated. Similarly the characters of Sarita, Manoj and Daadi were representations of various mindsets in the society. “The character of the chameleon had a significant role in the story too.” Muskaan traps the chameleon to play pranks on others initially, only to realise later that she might be inflicting pain on it and learns the value of life in every being. “Each character in the story had a character arc, and his/her own learning curve,” he added.

The medium of animation is new to majority of adult audience in Himachal. Though the youth are exposed to cartoons, they do not expect to see a serious subject in animation. “We wanted to use this notion of theirs to our advantage by catching them emotionally off guard,” Deb shared. They kept the story simple and overtly emotional before introducing the hard-hitting subject with bluntness. “We intentionally wanted to leave the audience restless to push them out of their mindset and make them think rationally.” Deb said that youngsters in smaller towns, especially villages are exposed to ways of life and childbirth much earlier than urban kids. “Yet to know about abortion (in the context of foeticide) is surely shocking even for a little village girl, which is why Muskaan does what she does in the story to make the elders in the family realise the severity of the inhumanly act. Through this shocked innocent young girl, we wanted them to acknowledge that their life-ending act is no less than a murder!”

For Muskaan, the team wanted the characters to have a unique Indian touch. “Since most of the experienced character animators had a distinct American body language, we decided to shoot acting references for the entire film. We got in touch with an experimental theater group in Pune and did a couple of days of character building and animation orientation workshop with them before actually shooting the character acting reference for the entire film. Though the animators struggled to break away from the American body language they were used to, we feel we could achieve what we intended to at a good extent. In our upcoming projects we would like to explore and refine this further,” a proud Deb commented. 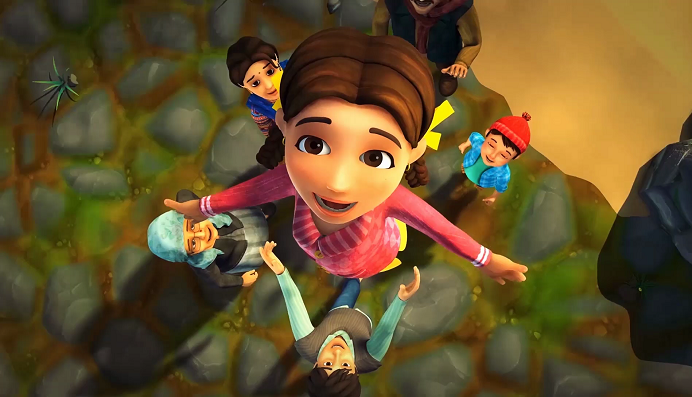 As they use the relatively new open source software – Blender at Girgit Studios for 3D animation production, Technical Supervisor Enrico Moras spent 10 to 15 days in giving orientation to the animators about the software before they appreciated it. “We keep telling budding artists at Girgit to always focus on their basic animation skills and not be restricted to any particular software. Software change and update, but one should be flexible. Adaptation is the key! Hence Girgits!”

Sonal Kaushal (Chhota Bheem, Doraemon) voiced Muskaan’s character while a popular band “Laman” from Himachal composed the background score for the film. They also composed a special rendition of the folk song Amma Puchhdi for the film.

Directed by Avinash Medhe, one of the founders of Girgit Studios, Muskaan has been appreciated by Ministry of Women and Child Development and there are talks to spread it across the country. It was featured on 8 March, 2017 at the celebration of Women’s Day in Shimla in the presence of Himachal Pradesh, chief minister Veerbhadra Singh. It got over 15,000 organic views on YouTube within five days. DVDs of the film are being distributed in schools and colleges and it is being broadcast through local cable networks also.

On the premiere day, Shimla’s heritage Gaiety Theatre was packed with an audience of over 500. “When we saw the audience gasping, laughing, murmuring and sighing at the points we intended them to, we were satisfied to know our design worked,” Deb remarked. It received an overwhelming response on social media as well.

Through Muskaan, Girgit Studios managed to bring smiles on the faces of all, along with tears of realisation. We are sure that the film must have touched the hearts of people and the lives of women in Himachal.