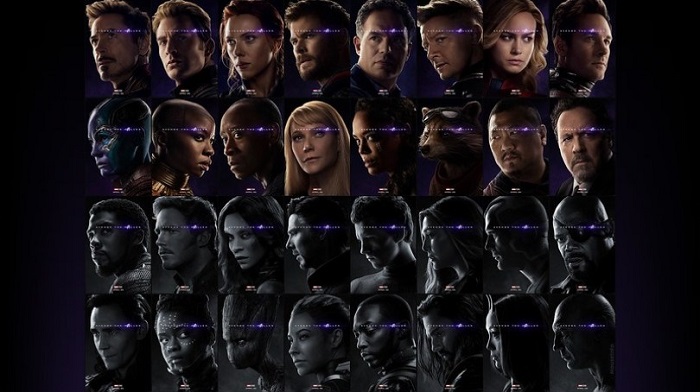 With less than a month to go before Avengers: Endgame hits theatres, Marvel has amped up the marketing momentum with the release of 32 new posters that significantly confirm the fate of all the heroes of Infinity War.

As Thanos snapped his fingers upon collecting all the six infinity stones, we saw half of the lives of the universe turn to dust, including some from the Avengers cohort. And Marvel seems to serve a timely reminder of the same with a poster of each of them, darkened and emblazoned with the words “Avenge the fallen”.

Some of the OGs such as Iron Man, Captain America, Bruce Banner, Thor, Black Widow and Hawkeye survived the snap, as did War Machine, Rocket, Nebula and of course, Captain Marvel. So the posters featuring these survivors are bright and light up with colours as we can see the remaining heroes tucked away in their respective costumes.

However, the digital images also confirmed the disintegration of another important character in Shuri, who’s survival prospects have been bandied about with time. Shuri wasn’t shown turning into dust like her brother T’Challa.

However, the first official trailer did appear to faintly confirm the theory when her face flipped through the holographic screens that portrayed the faces of those vanished from the scene which Banner agonisingly pursued through. Any lingering doubts even after that has been effectively put to bed now: Shuri was indeed dusted by the snap.

Anyway, these 32 images mark the first among the many more commercial gigs that Marvel would have pipelined over the next four weeks as the release edges ever closer.

Based on Marvel comics, Avengers: Endgame arrives on the big screen on 26 April 2019.