As the world continues its efforts to contain the Covid-19 pandemic, the resulting scenarios have changed the dynamics of regularity by large and this change is expected to grow further.

However, amid all the chaos and uncertainty, there’s been an evident and significant beneficiary: Online Gaming.

Nationwide shutdown has led to Indians spending more time on their mobile devices. As we do not venture out and go about our daily schedules most of us are glued to our screens, to engage or entertain ourselves or to socialise and keep in touch with our peers. Online gaming is an amalgamation of all of the above.

The initial data released by viewership measurement BARC India and global measurement data analytics company Nielson in the end of March stated that the number of users in the gaming category saw an increase of around 2 per cent while the time spent on gaming went up by 11 per cent to 169 minutes per user/week.

“We are living through unprecedented times. Physical social distancing seems to have led to a phenomenal growth in virtual social togetherness with an almost 20 per cent increase in time spent per user on chats, social media and news in the last one week. And we anticipate this to grow further,” said  Dolly Jha, country leader, Nielsen Global Media, South Asia. 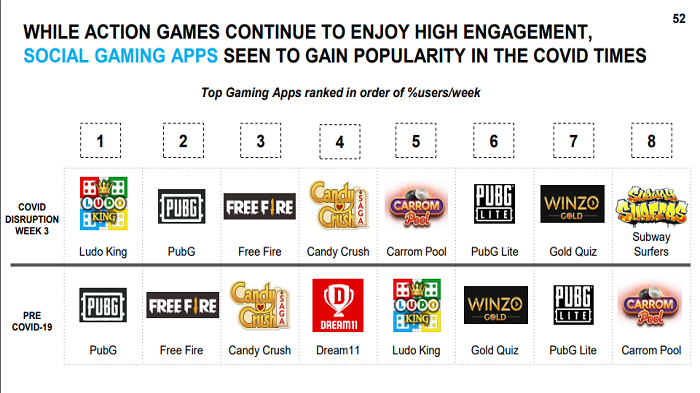 Gaming over the years has come a long way in the country. From being an absolute niche, it has somewhat paved its way into the mainstream lead by casual gaming and cheap mobile data-propelled online multiplayer rush on mobiles.

A quick run on Subway Surfer while waiting for a meeting to start or catching up with cousins over a game of Ludo or even a few rounds of PUBM or Free Fire for the evenings with friends, the scenarios are myriad with one thing in common. The mode of connecting and engaging with people amid the lockdown, with a mode of interactive entertainment: online gaming.

Another report was pushed out by the aforementioned companies again in April and the increase in numbers relating to online gaming in the country were staggering. 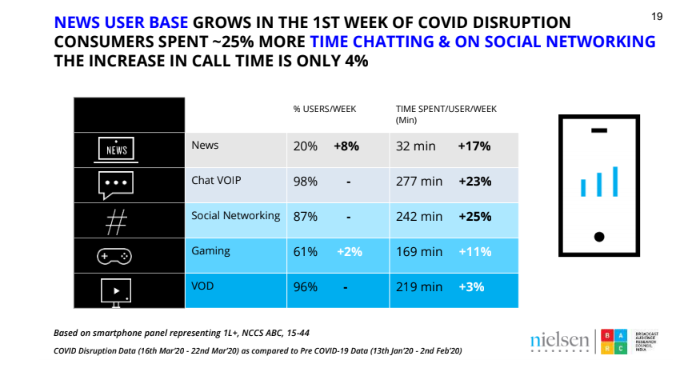 This does not come as a surprise of sorts. As the country, like most of the world, is going through a lockdown with strict social distancing guidelines by the government in place, gaming is providing a much needed relief in terms of keeping individuals busy, entertainment and socialising to a large extent, albeit virtual.

“On the whole the lockdown caused by the pandemic has had a positive impact on the gaming sector. However, fantasy gaming has been severely affected owing to cancellation / postponement of all major sporting events both globally and in India. Moreover, it will take a couple of quarters for things to get back to normal which will prove to be a challenge for all fantasy gaming operators.” said Paytm First Games COO Sudhanshu Gupta.

Paytm First Games has recently found success amid the lockdown as they experienced an enormous surge in users for their Ludo game. Titled First Ludo, the game amassed  over 2 lakh new users joining the game every day, the game-time per users has also increased from 32 to 45 minutes. Its ‘Play with Friends’ format has seen a jump of 300 per cent, as people invite their friends and family to come and play on the same ludo board irrespective of where they are. The company also recently conducted their first Clash Royale online tournament amid the lockdown which reportedly got 11,000 registrations. 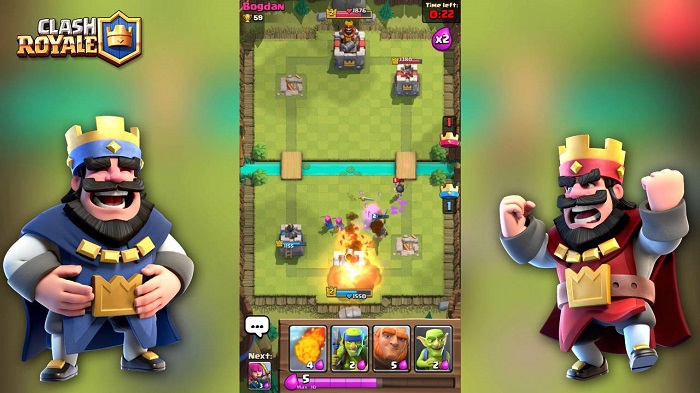 Similarly, indigenous platform Gamerji, which hosts online games such as PUBG Mobile, Call of Duty Mobile and Clash Royale experienced a growth of more than 80 per cent in terms of users amid the lockdown.

“We (on Gamerji) gain an average of 43k new users a month. In the last 14 (Last two weeks of March) days we have had more than 72k new signups. We have increased more than 10 tournaments everyday and even our revenue has grown by 57 per cent.” said Gamerji co-founder Soham Thacker.

Given the high demand, the platform has also upped the ante by hosting free solo tournaments everyday for gamers to participate and win cash prizes. It seems to be an effort by the platform to increase user engagement and bring more offerings to its consumers at this time of lockdown. Instead of developing new features, the team is focusing on hosting a higher number of tournaments per day to build viewer stickiness. 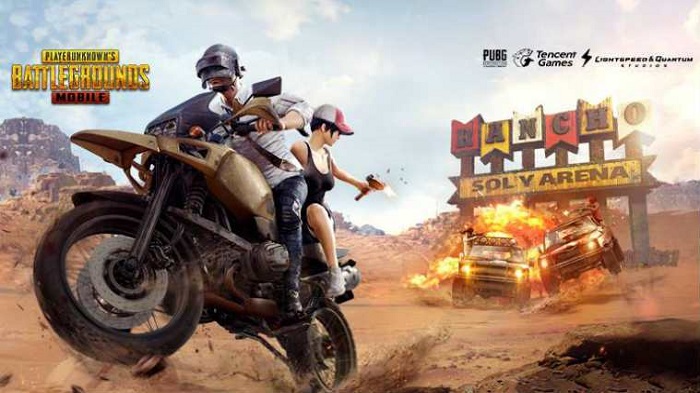 Moreover, people who were not introduced to gaming till now have taken it up during the lockdown for obvious reasons. As they are usually introduced or invited to play by a friend or family, casual social gaming is on a rise.

Evidently, the need to stay connected and socialise during this pandemic is causing this surge in Social Gaming. Multiplayer games like Carrom, Ludo and even games from the Battle Royale genre made famous by PUBGM have seen twice the gameplay time. Moreover, there has been an increase in playing time for casual games like Bubble Shooter, Knife Up, Subway Surfer. Activity on the social features of the app such as video and audio usage during game play has also reportedly doubled while it is also working the other way around as quite a few of the OTT platforms have introduced gaming as their offerings in the nation.

“We are seeing the multiplayer modes on the platform grow manifold, up by three times.  Private tournaments and Vs-Mode (a feature wherein players play with friends and family) on our app has grown considering people are playing with their friends online amid the lockdown, suggesting that people are interested in connecting with their friends/loved ones online via gaming these days – almost as if gaming is a conversation facilitator.” says WinZO Games co-founder Saumya Singh Rathore. 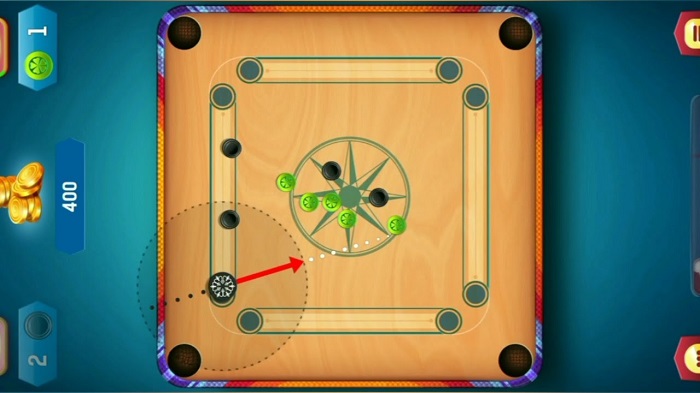 On WinZo’s platform, time spent and the number of users has grown by five times, recording an all-time high. It is also observing a 30 per cent spike in Tier-1 traffic daily, even though the company does not even market its product to this category of audience as the platform is a tier two to tier five focused vernacular product where 80 per cent of the audience is consuming the app in vernacular languages.

Says Singh, “Hence, we are consciously evolving the content on the platform to meet the entertainment needs of this new audience that we are adopting. We tied up with Tencent Games for PUBG Mobile in this lockdown. We also added Free Fire and Ludo within a span of two days to cater to this new audience.”

The current situation that is happening to the gaming industry in India and the rest of the world is pretty unique and paradoxical. Online gaming has been boosted by the lockdown imposed across the globe. The platform, ‘Steam’ has hit a historical number of players connected together with more than 22 million over a weekend.

The sales of video games are also booming since the lockdown started, to about a few weeks reaching almost three million downloads.

However, these numbers might be flashy, but once the pandemic recedes and lockdown measures around the world are eased, there is bound to be a major shift in numbers, or is it?

Says Ecole Intuit Lab, Mumbai AVP – operations Yan Garin, “When I used to live in Paris, we had a major strike of the transportation industry that lasted for months. Commuting became a major challenge; so many people bought a bicycle and started going to work this way. When things got back to normal, some of the commuters who discovered the benefits of this experience, kept their bicycle as a means of transport. The same way, I think a lot of people are discovering gaming these days, and many of them will develop a taste for it, or even raise a passion.”

It is however clear, that even though the numbers during the lockdown will erode as restrictions and movements are eased, more than a month of lockdown time is also habit forming for many users and it can be expected that post lockdown the new normal will be much higher than before in terms of number of users who will still continue to be engaged with games.

“We feel the organic growth would not be comparable to this unprecedented time- when people have absolutely limited sources of entertainment. People are moreover consuming content in the form of either games or videos sitting at home. At WinZO the peak hours/ prime time for gaming has changed to 11am to 5pm, which was earlier 7pm to 11 pm in the evening. This shows people are spending more time during the day playing online games – and spending the evenings with the family. Our concurrent users are increasing day on day at 30 to 40 per cent. The paid conversions have increased by 20 per cent, suggesting that the sentiment of paying is not impacted- yet.” asserts Singh. 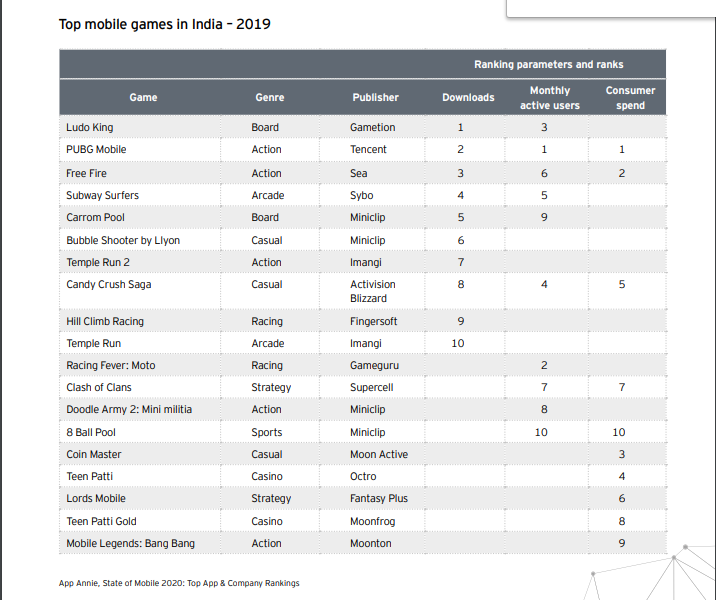 This impetus (if a way or another) comes amid India’s already burgeoning online gaming industry according to the latest report released by FICCI titled, “The FICCI-EY report ‘The era of consumer A.R.T. – Acquisition Retention and Transaction”.

It stated that the online gaming segment retained its position as the fastest growing segment on the back of transaction-based games mainly fantasy sports, increased in-app purchases and a 31 per cent  growth in the number of online gamers to reach around 365 million. This represents a 14x growth since 2010, when there were 25 million gamers. The online gaming segment grew 40 per cent in 2019 to reach Rs. 65 billion and is expected to reach Rs187 billion by 2022 at a CAGR of 43 per cent.

Concludes Gupta, “2020 will be led by Esports, Casual games and Rummy in terms of gaming in India with Fantasy lagging behind due to impact on physical sporting events. A lot of businesses will be able to register greater than 50 per cent year on year growth.”

While we all hope for the pandemic to subside sometime soon and we go back to our daily lives, the lockdown period is and will definitely keep spawning more gamers in India and it is likely that a certain percentage of it will still be playing post the lockdown even if for a lesser amount of time. This in turn will help push the industry further by creating more awareness, bringing in more users, washing off some of the misconceptions associated with gaming and making it easier for the companies to reach out to an audience which is a little more educated about their offerings now.