Animation Comics Latest News
The entire world is grappling with the COVID-19 pandemic. The number of people affected by it continues to increase, continuing this macabre journey. India too is no exception with 1440 confirmed cases till today. The entire country is presently undergoing a 21-day lockdown to contain the spread of the virus, as declared by PM Narendra Modi on 24 March.  While the lockdown was of utmost necessity to control the outbreak, what we needed was an immediate lockdown but not an unplanned one. A lockdown that aimed to mitigate the spread of the virus, has now left huge numbers of people in distressed conditions for whom even social distancing is a luxury. 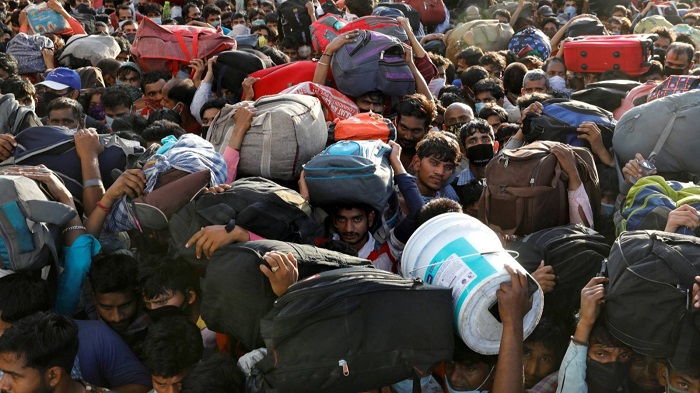 Migrant labourers, who work in different cities for work, are the worst affected lot who  suddenly found themselves unable to earn money or feed their families, as most of them are paid on a daily basis. Thus, they are left with no choice but to leave the city and return home, literally carrying all their belongings accompanied by their families including children and old parents. But, due to lack of transportation, they had to walk hundreds of miles in large groups, few of them succumbing to death on the way. Lately, Uttar Pradesh has shocked the country and sparked controversy after migrant workers returning home were doused in disinfectant used to sanitize buses. Images and a video went viral showing three people in protective gear, spraying the liquid directly on a group of Indian workers as they sat on the ground in the northern city of Bareilly. The chemical used was Sodium Hypochlorite or bleach which all of us know might turn out quite harmful. 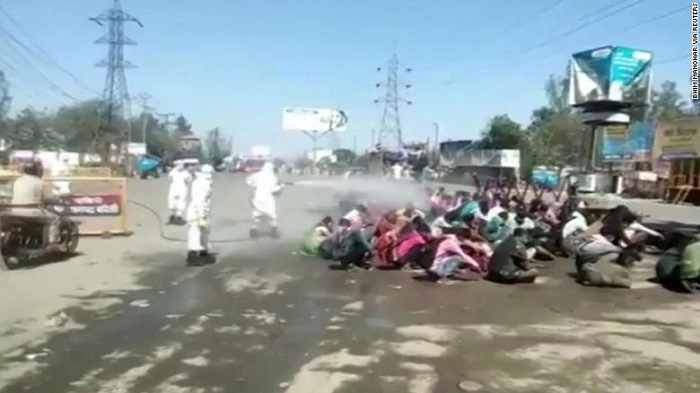 This heartbreaking incident has received rave criticisms from different communities including animators, illustrators and comic artists. People across the country have stated it as the misuse of power to abuse and torture poor homeless people who are scared, helpless and hungry. Here are some protest arts by animators, illustrators and comic artists depicting the plight of the labourers on social media: Kalp Sanghvi – Animator at Ghost Animation : “I feel this is an endless cycle. We all need to learn from this pandemic. If we do then we can lead a better life. If not then this is just the beginning. Earth will heal, humans will perish,” said he.

Mahafuj Ali (MAli’s) – Illustrator and Comic Artist : Noted he, “Everyone is now talking about staying at home, how to pass time with reading books, creative exercise, cooking and spending quality time with family , but not everyone has that privilege, those people who work for daily wage and live a hand to mouth existence hundreds of miles away from their village. It looks like another crisis happened just like our time of independence and after 80 years still at the same place where a large section of our country does not even have access to basic necessities.” Upamanyu Bhattacharyya – Animator at Ghost Animation : He captioned his work – “#Nocountryfordailyworkers. Devastating images of tens of thousands of citizens trying to get home after the lockdown has left them with no jobs, no transport and no support. Now, more than ever before, demand better circumstances for our people.”


#nocountryfordailyworkers Devastating images of tens of thousands of citizens trying to get home after the lockdown has left them with no jobs, no transport and no support. Now, more than ever before, demand better circumstances for our people. #exodus #refugees #indiangovernment #lockdown #curfew #displacement #recession #jobs #dailyworkers #india #covid19 #coronavirus #privilege #art #illustration #news #drawing

A post shared by Upamanyu Bhattacharyya (@upamanyubhattacharyya) on Mar 29, 2020 at 2:31am PDT

Satrajit Choudhury – Comic Artist :  “This human tragedy of millions of hapless people having to walk 100s of miles is a sight which has scarred my mind for life. Imagery of such nature was so far confined to the saddest chapters of human history – world wars, partitions, great depression and so on. We are witnessing the brutal history again, and honestly, without any assurance of when it will end,” Choudhury mentioned. Saswata and Susruta Mukherjee (Bobby and Bob) – Illustrators : “It is pretty evident that a lot of unplanned actions by the government affects the poor in the worst way. Be it demonetization or this lockdown. Having said that we do believe that lockdown is the most important factor in stopping the spread of this virus. But when you give four hours to prepare a country of 1.3 billion people for a lockdown without stating a single information about the essential services or the necessary arrangements for migrant workers, you basically defeat the entire purpose by throwing the country into chaos. Surprisingly there are people who don’t seem to find flaws in the government at all. Even if there are migrant workers walking hundreds of kilometres or dying on the road , these people want to look at the “positive side”. A majority of the population wouldn’t question the government as long as they have the privilege to stay at the safety of their home. Our artworks came as a reaction to that,” said the illustrator and filmmaker twins. Abhishek Dey (Amoebak) – Animator and Illustrator : “Everyday new images are surfacing of hundreds of migrant labourers stuck in transit with many having no means to protect themselves from the virus, not a mask, no sanitizer. The lockdown seems like a state for the privileged. If, as the government has claimed, it knew of the virus months ago, it should’ve accordingly taken measures and arranged for facilities that would allow easy passage/shelter to the migrant labourers who are currently facing the brunt of this unplanned lockdown. But planning in advance isn’t what our government is known for. Instead, at this time of high crisis the government is making sure that the preparations for Ram Navami are in place and if not the labourers, at least the idol of Ram Lalla is allowed smooth transit, as groups of labourers remain stranded on highways and roads, left to die. And the ones who do see the face of their homeland, are disinfected with bleach. Images of this mass exodus have exposed the class difference between the workforce of construction site labourers, waste collectors, cooks, and house painters who keep Indian cities running and the city-dwellers they work for,” commented this young and talented animator. We still have a long fight ahead, not only against COVID-19 but against insensitivity towards the poor working class, against food shortage that many are fearing will come soon. As noted journalist Faye D’souza said that already crops are rotting, as there’s no one to cut them, no transportation to take them to the bazaars despite Government assurance, given labourers are stuck in different parts of the country.  (Feature image courtsey : Anupama Bose)