Vivid Imaginations, master toy licensee with worldwide rights excluding US & Asia is already on board, with new partners to be announced imminently.

Thunderbirds Are Go! will spearhead ITVS GE’s slate at the show with the ambition of establishing the brand in additional international territories and across new demographics. As part of its Expo launch activity, ITVS GE has unveiled the first official image of the 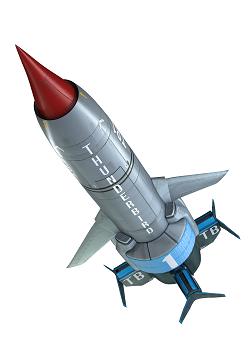 iconic Thunderbird 1 from the new series to give potential partners a glimpse of the toyetic vehicle designs that will play a key role in the franchise. Visitors to ITVS GE’s stand will be able to see a large scale model of the Thunderbird 1 that has been exclusively created for the show by leading designers at Pukeko Pictures and Weta Workshop in addition to an unmissable green screen experience.

ITVS GE SVP head of global merchandising Trudi Hayward said in a statement: “The new series looks stunning and we have every confidence that it will be a massive global hit. There is a huge affection for this much-loved brand in the UK where it is a national treasure and there are also many exciting themes and characters that will chime with global audiences tuning in for the first time. The series will be supported by one of our biggest ever marketing and retail campaigns and we look forward to showcasing a wide array of licensing opportunities at this year’s International Expo.”

Thunderbirds Are Go! is the exciting new remake of the classic 1960’s TV series which coincides with the 50th anniversary in 2015. The new series has been produced by ITV Studios in partnership with Pukeko Pictures and highly acclaimed Weta Workshop. Debuting on TV screens from Spring 2015, Thunderbirds Are Go! will introduce cutting-edge new filming techniques that combine CG animation with live-action miniatures. The first series will launch with 26×22 minute episodes and will air in the UK on ITV and CiTV, the UK’s foremost kids’ commercial TV channel.

The international roll out of Thunderbirds Are Go! will be supported by an extensive consumer marketing campaign, which includes retail promotions, digital initiatives, new product partnerships, events and live shows. The new series has already generated significant interest from the brand’s fan base and the market to date, attracting best in class partners for the licensing programme.