After almost four years, the new heartthrob of the country, the Baahubali-famed Prabhas donned a modern day avatar in the teaser of Saaho which was launched simultaneously with the release of the magnum opus Baahubali: The Conclusion. The promo has since gone on to get rave reviews and more than 20 million views across all languages on YouTube.

The clip is akin to Alice’s journey down the rabbit hole. What was so special about it? Out of the one and a half minute clip, 95 per cent of it was computer generated (CG)

Mumbai based Fluiidmask Studios was brought on board to bring the vision of director Sujeeth to life, and within a span of 25 days, the entire clip was ready. Fluiidmask Studios’ lead strategist Sheveta Raut says: “When the director approached us, he had a clear vision for this project. He came down to our studio and we brainstormed on how the shots could be executed. The brief that the team received from Sujeeth was just this – to put the viewer on a journey filled with certain motifs and elements that keep them on the edge of the seat leading to the reveal of Prabhas. As the audience gets settled with the character played by him, we cut into the shot of the jetmen flying through the skies of Dubai city.” Sujeeth came in with the concept art / storyboard done by Gopi Krishna – a renowned visual and concept artist – which laid the foundation and was crucial in achieving the output. Under the guidance of Fluiidmask Studios’ VFX supervisor Viral Thakkar, the team of 10-15 artists commenced their work on the teaser that we see today. As we observe in the promo, 90 per cent of it comprises of CG shots. To have a clear vision as to how the video would be structured to achieve the final result, Thakkar made sure that pre-visualisation was done so as to keep everyone right from the director, producer, cinematographer as well as the artists looped in with each other. Before the filming of a movie begins, our Hollywood counterparts, usually get their pre-viz done as it not only helps in easing out the complexities of film production but also reduces the overall costing of the movie. It keeps the whole review process very organic (example: Doctor Strange). The Indian market is slowly opening to the idea of pre-visualisation which is a welcoming change. The Saaho teaser starts off with a man who can be seen crashing onto a glass surface. The actor was shot on chroma in Mumbai. Fluiidmask Studios FX supervisor Viresh Raut explains: “The glass has a customised fracture pattern that subtly resonates with the structure of the eye. All these shots had to be created keeping in mind that they are not independent of the next shot but are rather co-dependent of it. This is where the idea of keeping a common thread that connects them all was crucial – the eye in this case. In terms of the glass sequence the reflection on each and every shard was manually applied to achieve the final effect.”

Also, the reflections of the body had to be mapped on the broken glass pieces. Multiple plates had to be shredded and it was one of the biggest challenges to accomplish.

In the next shot where we observe a girl diving was again shot in Mumbai in a pool. Viresh Raut adds, “The shot was amped with CG elements which connects it to the next shot i.e. of the highway network and buildings. This was again an intense CG shot considering the amount of reflections that were being played in it. There were water and camera particles which had to be stitched with the city/highway shot.” Another complex part was to model the highway in a creative way that looks functional and place the buildings around it. This lead to the last part of the actual zoom out of the eye. The simple zoom out of the eye was actually made up of multiple shots which were stitched seamlessly. “To achieve this effect – a high resolution eye was created keeping true to all the various parts that build up an actual eye which was blended to his face and then with his real eye. This was rendered at 6K and then composited in Nuke. Next, we had to match the CG camera to the Live Camera – in terms of the speed and magnification – to avoid any visual jerk.” 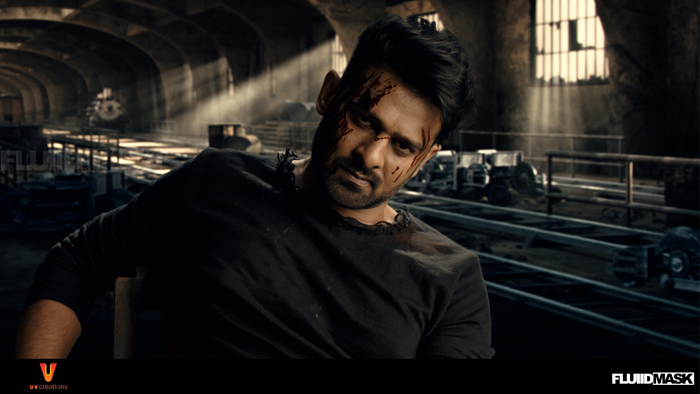 The shot featuring Prabhas was to be shot in an actual location but later it was shifted to a CG setting owing to the work being done at the studio.

Finally come the last two shots. Sujeeth wanted to shoot actual jetmen flying over Sheikh Zayed Road, Dubai. To get the right permissions for such a shoot was difficult and time consuming. The next option was to actually shoot real live flying jetmen which would mean a lot of re-takes and so on – adding to cost, timeline and the actual logistics. Keeping this in mind Thakkar and his team prepped a proof of concept of the Dubai Road within a span of two to three days. The moment the director saw it, he agreed to go-ahead with the CG shot.

The process then started to build the complete stretch of roads, buildings, trees and cars. This was done based on referencing from Google Maps and so a replica was created virtually. The CG lead at Fluiidmask Studios, Nilesh Posnak was instrumental in the creation of the hi-res models, assets and textures. A 1.5 kilometres radius of the city was built in CG which comprised of 70 to 80 buildings. Since, Maya wouldn’t have had been able to support such a heavy file (close to 18GB – making it almost impossible to render), the files had to be split in different proxies. This is where CG supervisor Amit Patil acknowledges the power of proxies (a technique that imports geometry from an external mesh at render time only) and the entire city was split into 17 files that were all assembled into one single file. Now, the jetmen had to be created. To achieve the look, Fluiidmask got in touch with London based studio – 4D-Max to do high detailed CG scans of the jetmen. These were re-topologised and thus the hi-res 3D models were created. They underwent the already set 3D pipeline where they got textured, rigged and were ready to be animated. In terms of character animation, the idea was to create an impression on the viewer that s/he is perplexed whether these characters are on the good or the bad side. With this underlying subtext the characters were animated. Another important aesthetic that goes unnoticed is camera animation; wherein the idea was to create a subtle sense of height and vertigo to start off the sequence. All in all there’s a lot of hard work, research, re-design and above all imagination that went in creating the teaser of Saaho. Currently, Fluiidmask Studios is working on many projects in Bollywood – Sanjay Dutt’s biopic, Fukrey 2, Drive, Inside Edge (an Amazon Prime original by Excel Entertainment). The team also has some more projects in the pipeline which cannot be revealed at the moment.