Games Latest News
Recently more than 100 people in the gaming industry, of which most of them are women, have come forward with allegations of gender-based discrimination, harassment, and sexual assault. They have shared their stories in statements posted to Twitter, YouTube, Twitch, and the blogging platform TwitLonger. These Tweets have tremored the gaming industry and have taken notice of widespread accounts of misconduct, and some companies have also started acting upon it. The stories have already produced vast reverberations, including the resignation of the head of one of the biggest management firms in all of streaming and the departure of over 20 streamers in his wake. In response, some streamers are boycotting the platform altogether today and refusing to stream. The floodgates opened over the weekend, after a Twitch streamer Hollowtide tweeted that a well-known Destiny 2 streamer was “scum.”

Although the original tweet received only 1,500 likes, it had a ripple effect on the industry. Others in the community saw his tweet, and began to share their own stories. “For a long time, I was afraid to say anything. I was worried it would ruin me as a content creator because my attacker had influence and a small place of power within the game industry.I’ve seen strong and brave women come forward about their experiences with assault, unwanted advances and discomfort forced on them by men and fellow content creators in our industry. It makes me angry and less afraid to share my story,” said Enola Leone, a content creator and graphic designer, in a Saturday statement on TwitLonger. Two of the most influential streamers accused of sexual assault were competitive game streamer Tom “Syndicate” Cassell and prominent Destiny 2 streamer Lono “SayNoToRage,” who has never shared his last name. Cassell is a streamer with three million followers who’s very publicly landed himself in hot water before — most notoriously after promoting a Counter-Strike skin gambling site called CSGO Lotto without disclosing that he founded it. Over the weekend, two women said that Cassell had forced them into sex while they were in relationships with him. (Cassell, who did not return requests for comment, called the allegations “false” on Twitter.)

Natalie “ZombiUnicorn” Casanova put out a video in which she said that Cassell forced her into non-consensual sexual activity in 2016. The two were “friends with benefits” at the time, Casanova wrote, but during one sexual encounter Cassell physically held her down against her will. “I smacked him and said, ‘No, stop.’” Casanova said that she later found out that Cassell had lied to her about not having any condoms. Another popular streamer who has faced sexual misconduct accusations in recent days is Lono, aka “SayNoToRage,” an influential figure in the Destiny community. He is married with children. Beginning on Friday, six different people accused him of sexual misconduct and harassment. (Lono has since responded to some of these stories in a video in which he said that some of his actions had been “inappropriate” and “unacceptable,” but denied others. ) Variety streamer JewelsVerne wrote on Twitter that in 2017, she “played an entire card game” while sitting next to Lono, who she said kept his “hand on my thigh” the entire time and “then basically asked for sex.”

Later, a streamer who goes by the handle Snaps published a letter she wrote to Lono. In it, she recounted an April 2018 movie night that she and Lono attended, during which she said Lono, at various points throughout the evening, grabbed her hair, repeatedly stared at her, insisted on touching her despite her protests, and talked about how being inebriated made him feel “really liberated… sexually.” 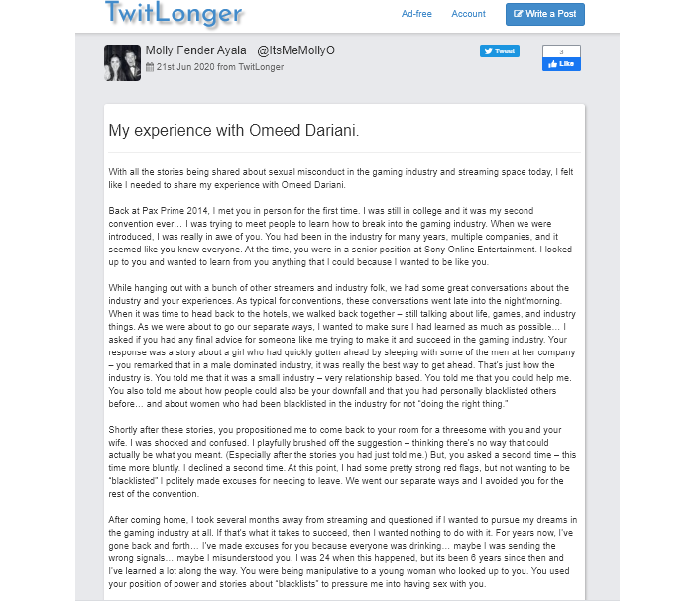 There are many cases like these where the victim has shared the story in the form of video, blogs, tweets in response to that here is how gaming industry responded: Facebook Gaming, in a statement, said, “We take all allegations of misconduct seriously and will investigate them thoroughly. We have a clear set of community standards, and we need to work together as a community to tear down toxicity in all forms.”While it investigates, it said it may suspend the account of the gamer in question. Ubisoft‘s three employees known for games like Assassin’s Creed and Just Dance, have been accused of misconduct. Ashraf Ismail, creative director of the upcoming Assassin’s Creed Valhalla game, stepped down from the project to take a leave of absence, according to Ubisoft. Ismail was accused of allegedly engaging in relationships with multiple women while married. “I am stepping down from my beloved project to properly deal with the personal issues in my life. The lives of my family and my own are shattered. I am deeply sorry to everyone hurt in this,” Ismail tweeted on Wednesday. His Twitter account is now deleted. Ubisoft apologized and said in a statement. “Concerning recent allegations raised against certain Ubisoft team members: We want to start by apologizing to everyone affected by this – we are truly sorry. We are dedicated to creating an inclusive and safe environment for our teams, players, and communities. It is clear we have fallen short of this in the past. We must do better.We have started by launching investigations into the allegations with the support of specialized external consultants. Based on the outcomes, we are fully committed to taking any and all appropriate disciplinary action. As these investigations are ongoing, we can’t comment further. We are also auditing our existing policies, processes, and systems to understand where these have broken down, and to ensure we can better prevent, detect, and punish inappropriate behavior.” 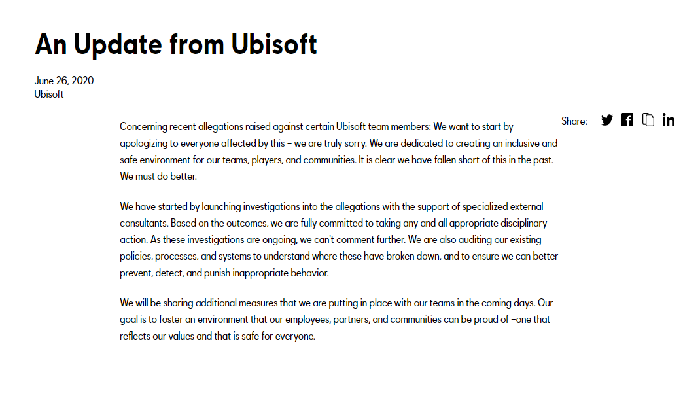 Effective immediately, Grant “GranDgranT” Harris has been released and is no longer a member of Evil Geniuses.

We have a zero-tolerance workplace policy, and take any accusation of harassment, or a violation of our policies handbook, seriously. — Evil Geniuses (@EvilGeniuses) June 22, 2020

Chris “NYChrisG” Gonzalez has been released and is no longer a member of Evil Geniuses.

Method, another esports organisation, announced Wednesday it would end its relationship with World of Warcraft streamer Method Josh, following accusations of predatory behavior. Co-CEO Sascha Steffens was also “placed on unpaid administrative leave pending the results of a third-party investigation,” it said.

Following allegations of misconduct, Co-CEO Sascha Steffens has been placed on unpaid administrative leave pending the results of a third-party investigation.

Twitch also put out a statement on Twitter: “We take accusations of sexual harassment and misconduct extremely seriously.We are actively looking into the accounts concerning streamers affiliated with Twitch and will work with law enforcement where applicable. We’re thankful for the bravery shown by those who have come forward to speak about their experiences, and we are committed to working to make the streaming community safer for everyone.”

Additionally, Twitch’s CEO Emmett Shear made public an email he sent internally to his company. In it, he said that punishments on the table for streamers who’ve been accused in a “credible” fashion include “banning, removing partnership, or removing people from promotional opportunities.”

There’s been a lot of important conversation happening over the previous couple days, and I’ve heard your voices. I’d like to share the email I just sent internally to the company on the topic. pic.twitter.com/B1V34lT9EI

Adding to the queue Dota 2 commentator and community figure, Toby “TobiWan” Dawson, has been accused of sexual assault and harassment too. Code Red Esports has dropped TobiWan from its representation, Beyond the Summit has cut ties with him, and Valve has removed his voice lines from The International 10 Battle Pass.

Gaming scholars said the community may be more receptive to addressing allegations of sexual misconduct this time around after embracing social activism during the recent Black Lives Matter protests. If gaming leaders start taking action on such misbehaviour against sexual assault, harassment, abuse, bully with no tolerance then sooner it will be healthier gamespace.