FICCI Frames 2019 has just begun and it is already a big success. The first day of the three-day event which will be held from 12 to 14 March, commenced today at Grand Hyatt, Mumbai and saw a series of enriching and insightful sessions spanning across several media and entertainment industry.

The 20th year of FICCI Frames began with dignitaries lighting the lamp followed by FICCI vice president Uday Shankar giving the opening address about the booming media and entertainment industry in India. He said, “The great media and entertainment (M&E) journey has just begun as the industry is ready to contribute more than any sector in the country.” His address was followed by the industry address by Motion Picture Association of America chairman and chief executive officer Charles Rivkin and National Geographic Partners chairman Gary Knell. Rivkin pointed out, “There is huge potential in Indian content market. Big names in the business – Sony, Viacom, Netflix, Disney, Fox and others are deeply interested in India.”

Knell too noted, “We’re seeing a dramatic shift in the content market and audience. More than 60 per cent of the Indian audience is under 35 years and prefer good quality content on streaming platforms.” Film producer and UpGrad chairman and co-founder Ronnie Screwvala added on the similar points of the flourishing of the media and entertainment industry of which 10 per cent is contributed by the Bollywood industry. Ministry of Information and Broadcasting Amit Khare also gave his inputs on the M&E industry which is growing by “… 39 per cent and produces almost two million jobs, create revenues and reflects the vision of India to the world.” After FICCI secretary general gave the concluding address, Netflix product VP Todd Yellin in conversation with CNN NEWS 18 editor Anuradha Sengupta, mentioned that the streaming giant is like “DNA, a double helix system for technology and entertainment.” He also mentioned that interactive storytelling works well with the audience around the world and they attempt to provide that. He said, “Competition is a great motivator for us, and a positive thing for the audience.” 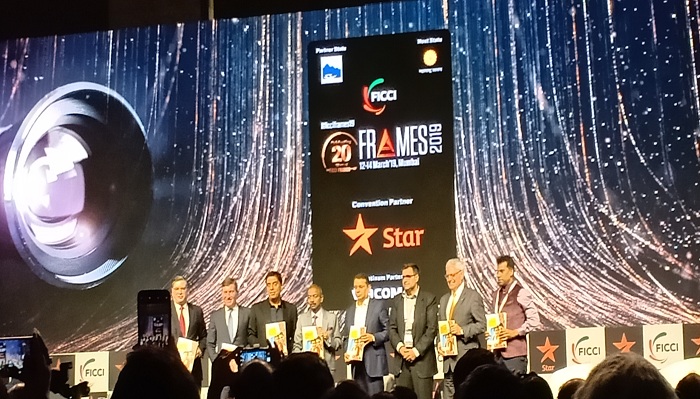 The theme session ‘Indian M&E Industry – Global Goes Indian’ had Khare along with Economic Advisory Council to the Prime Minister of India chairman Dr Bibek Debroy talk about India as the growing media market in the world. They also discussed about the adding on of Indian content, helping India to capture attention globally. Post lunch the audience was enthralled by a session by renowned author Devdutt Pattanaik who explained brilliantly how the Indian scriptures are relevant in the ever-changing world of M&E. He noted, “Telling a story in India is different than that of West, as there is no concept of justice in Hinduism but ‘Karam’ and ‘Fal’. It’s a cyclical thing. The Ramayana is not about war or revenge, but separation. Sita’s separation from Rama, Mandodari’s separation when Ravana dies. The problem is Indians don’t understand the brilliance of scriptures, to the mythology and history are the same many times.” After Pattanaik’s session, Viacom18 media group chief executive officer and MD Sudhanshu Vats revealed a lot about the current scenario mainly, content shift from broadcast to smaller screens, technology – how it has bettered the way of storytelling and how a story can be told better through it catering to a particular audience, difference between curator, creator and consumer. ” He explained, “The advantage of OTT is the ability to customise, experiment and explore.” Another session alongside talked about the shift in the media and telecom industry. The panel addressed the biggest question on every media person, how the data will help shape M&E in the future? Vixen Labs CEO James Poulter shared the changing ways of consumer engagement through voice. The session saw a discussion about the technologies like Amazon Alexa, Google Assistant and others playing a huge role in making the brand reach out to consumers. The Powering M&E industry session saw a lot of inputs from Rajya Sabha member M V Gawda, Lok Sabha member Arvind Sawanth moderated by Neeraj Roy talking about how the Indian M&E industry has a significant footprint both in terms of economy and the effect on the populace. Gawda said, “Indian media and entertainment industry accounts to almost 40 billion. There is a certain kind of magnetism that connects the sector with the citizens.” The panel also emphasised on the importance of thinking on a global scale by being diverse, attractive and imaginative. Next was the keynote by MX Player CEO Karan Bedi talking on ‘Local vs Global’ through a PPT presentation that showcased how ‘Made for India’ gave tough competition to ‘Made for the World’. He focused on how MX Player is gradually becoming a prominent name in the OTT business, in such a short span of time than its inception. UFO Moviez joint managing director Kapil Agarwal also took the audience on the journey of his company, and how it has gained reputation by being the first one in the business to deliver movies in theatres through satellites and revolutionising how movies were distributed. Ernst & Young advisory services partner Ashish Pherwani next presented the FICCI EY report and highlighted its few pointers. Online gaming has seen a rapid growth spurt of 52 per cent whereas Animation+VFX has gone up by 18 per cent. Digital Media too has seen a rise of 42 per cent with Digital ADs and subscriptions growing by 34 per cent. 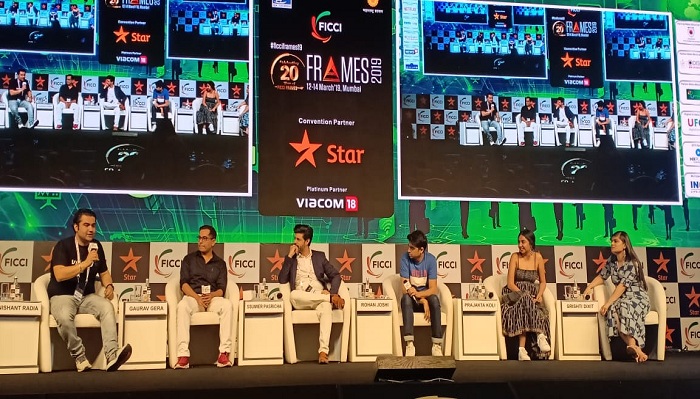 The last session was a special one as it was a candid chat with Bollywood filmmaker Rohit Shetty who has produced five 100 crore hits and three 200 crores blockbusters. He informed that the 90s charm has worked well for him and his films as he could make/deliver them in his own style and way. Shetty also focused on piracy and how we should end it with all the measures. “If we stop watching, piracy will end automatically. With content going online, chances are high of piracy but we must stop it.” He concluded by mentioning that state-wise entertainment should be considered as the tax differs and so does the audience. The evening ended on a musical note with popular singer Papon entertaining the audience with his magical songs. The inaugural day of FICCI thus ended on a successful note raising expectations for the rest two days.