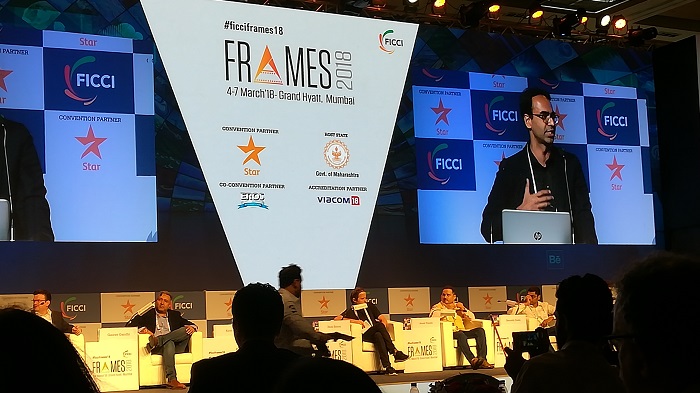 Next was a keynote by Vice Media CEO-APAC Hosi Simon. Simon showcased a video of the kind of stories covered at Vice Media and spoke about developing the youth media company. “All we care about is the story,” Simon stated, talking about the company’s ideology. “The story does not belong to any one person in particular. It belongs to the one who brings the story.”

He also revealed the company’s place to start in India, in the first week of April, with an umbrella of outshoots apart from the media company- creative agency, production house, short form content, long form content, documentary making and more. One of the reasons VICE is a success is because it has become the “voice of the youth,” shared Simon.

Gandhi started, “The delivery mechanism is almost irrelevant. If you look at the content producers, they’re making content for almost all generation of consumers and there’s a demand for the same. So from an age perspective, there are no boundaries and the scope has in fact widened.”

Bajaj explained, “The economics of television business are driven by the ratings by BARC. But that allows us to create content of a specific format, type etc. that cater to a 100 to 200 people.” Pantvaidya asked Tripathi, “Do you think mythology is better represented on a larger screen,” to which the Shiva trilogy author jokingly replied, “I think mythology stories are best told in a book.” He then elaborated, “The multiscreen environment for mythology and other genres has radically changed. It used to be a great democritising tool. Today, the average role is getting killed. Now either it’s everything or it’s a small niche. If you have everything, then your content plays across multiple platforms. So if you have an IP, then that IP succeeds across all platforms.” He also highlighted that an IP never dies. One never knows the kind of popularity her/his creation receives after many many years even. Bedi then stated, “Content travels everywhere. Having a large audience is one of our assets and all the content that we are creating for this massive audience easily goes on to any of the platforms. But creating content for one particular medium audience is difficult as everything is converging very fast.”