Famous Studios brings Motion Capture to India in collaboration with Centroid, UK. The two are ready to create magic for Indian visual content. Set up at Famous Studios, Mahalaxmi, Mumbai, the lab is fully-equipped.

Famous Studios managing director Anant Roongta said, “At Famous Studios, it has always been our endeavour to deliver the best, be it technology, ideation or any kind of support. With Centroid, we lay the foundation for India to drive a new dimension of art, thus fostering the development and growth of the creative sector.” 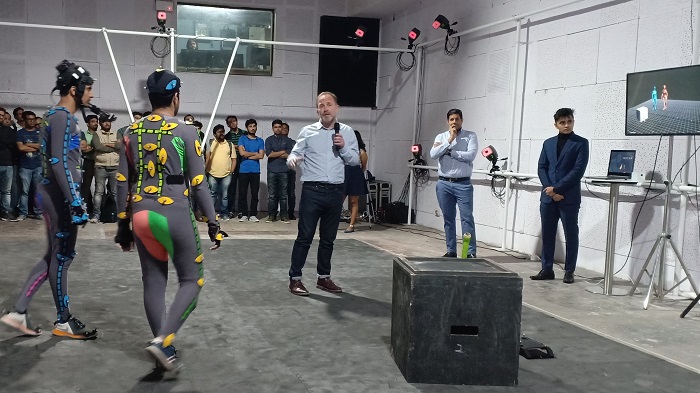 Centroid- UK, Serbia, India CEO and producer Phil Stilgoe gave a walk-through and live demonstration of the implementation of motion capture to highlight the real potential. Motion capture has internationally contributed to film-making and gaming, through titles like Guardians of the Galaxy, Godzilla, Ant-Man, Mad Max and Assassin’s Creed among others.

At the launch, Stilgoe said, “India is one of the talent lakes in the entertainment sector. Not only is the creativity top-notch, the development of the sector is in the hands of innovative professionals who are increasingly hungry to create greatness. Monetarily, there is massive growth potential. Integration if technology will only enhance what we already have here, creating visual gold for the viewer.”

By bringing this technology to India, Famous Studios has paved the way for new dimension of film-making, animation and visual innovation. The lab will bring internationally-aligned technology, setting the stage for Indian artists and creators. Services like motion and performance capture, previs and virtual production, character pipelines for game and VR developers, crowd sim solutions and much more are now on offer.

“Partnering with Famous Studios is a no-brainer for us. Not only they have a strong position and reputation built over seven decades, they have time and again showed their readiness to adopt new technology,” Stilgoe added.

Built over 1500 sq. ft. Motion Capture Lab at Famous Studios will support artists through the entire journey, from shooting, to post-production. With this new technology, Famous invites a new generation of visual creators to break into new spaces.