EA SPORTS Madden NFL 20 is taking the sports world by storm, turning players into stars with some long-awaited football action. Over 70 per cent of players dove into Face of the Franchise: QB1 during the game’s first week in a bid to become the next great quarterback. The new mode shows 80 per cent growth over last year’s Longshot 2, demonstrating just how eager Madden NFL 20 players are to put themselves in the game and become stars.

Fans couldn’t wait to get their hands on the game, as Madden NFL 20 had the highest final week of pre-orders in franchise history. Also, well over half of week one sell-through units were digital, a first-ever milestone for the franchise. Additionally, the head-to-head action in the game has been intense — the number of games played in-game in the first week is up by double-digit percentages over last year. 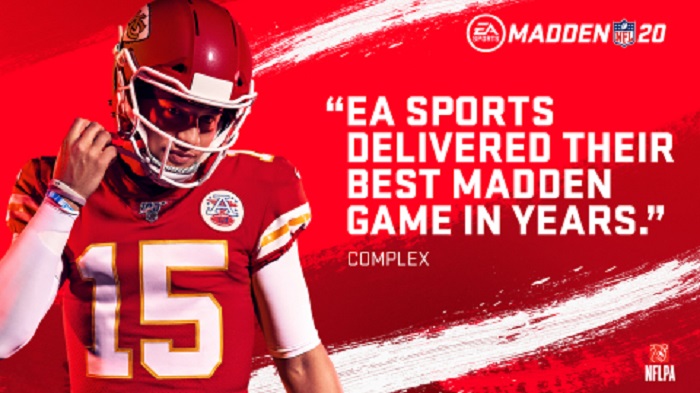 The superstars of the Madden NFL community have also been shining during launch, creating nearly 2,000 videos which have been viewed over 63 million times. This year’s features are striking a chord with Madden NFL players, with the highest positive sentiment ever measured on social channels for the franchise.

Additionally, the fun factor of Madden NFL 20 is resonating with major media outlets, with Complex calling it the “Best Madden game in years.” IGN applauds the on-field action, stating, “Playing as an X-Factor player is the stuff dreams are made of.”

Madden NFL 20 is developed in Orlando, Florida by EA Tiburon and is available now for Xbox One, PlayStation4 and Origin for PC.