While Boss Baby has been gaining positive response for it’s adorably humorous storyline, DreamWorks Animation recently revealed the look of its yet another 2017 movie – Captain: Underpants. Just like Boss Baby, Captain: Underpants is yet another movie based on children’s novel of the same name by Dav Pilkey. The novel went on to win a Disney Adventures Kids’ Choice Award in 2006.

While the series has 12 books and three spin-offs under its hood, it’s yet to be revealed which of the story will be featured in the animated movie. However, the basic plot line of the movie is that the adaptation will follow “George Beard (Kevin Hart) and Harold Hutchins (Thomas Middleditch), two fourth graders who hypnotise their tyrannical principal (Ed Helms) into stripping down, tying a curtain around his neck, and declaring himself Earth’s newest defender.”

“(Helms) has managed to tap into the sheer stupidity of Captain: Underpants,” director David Soren (Turbo) says to EW. “He’s a delusional superhero who thinks he’s got all kinds of powers and has literally zero ability beyond just that of a middle-aged man.”

Being #1 banned books, according to the American Library Association, Pilkey’s Captain: Underpants series was banned in some schools for insensitivity and being unsuited to age group, as well as encouraging children to disobey authority.

Soren adds that because the books are known for their irreverent, genre-bending style, the film plays with form in a similar way, switching between traditional CG animation and other media, from hand-drawn 2D comic scenes to sock puppet sequences.

DreamWorks Animation has earlier released movies based on novels like Home, How To Train Your Dragon which went on to receive positive responses both from critics and audience while the former received mixed reviews. 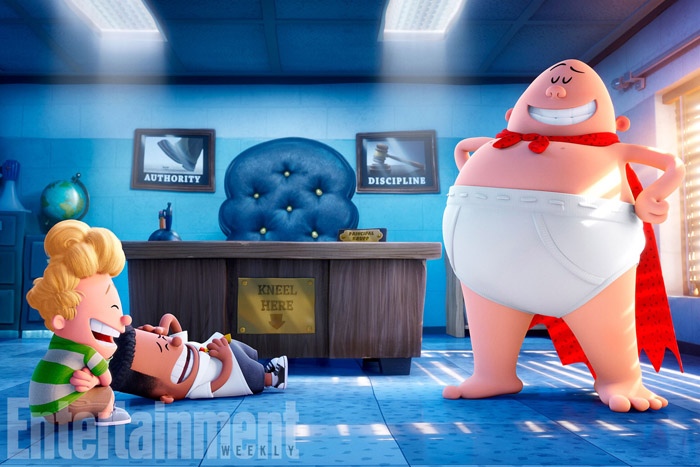