As DreamWorks Animation continues to build on its core film business and become a diversified family entertainment brand, the company is expanding its executive leadership team to best execute its business growth strategy. 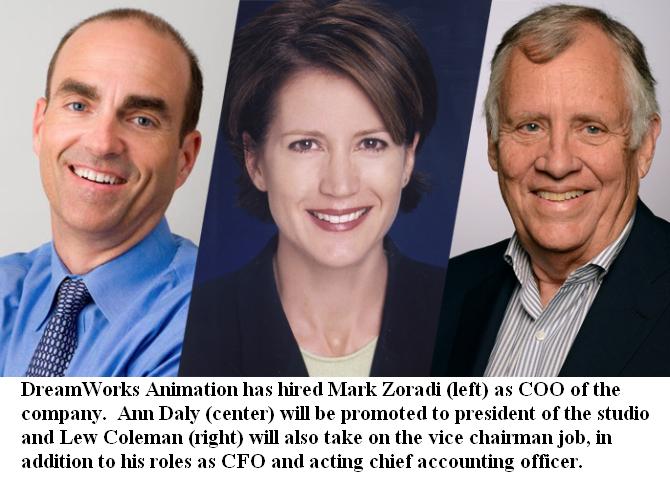 DreamWorks Animation CEO Jeffrey Katzenberg said in a statement: “As DreamWorks grows, we are focusing on creating a strong management structure that has the expertise and capacity to best serve the changing needs of our company. Ann and I are thrilled to welcome Mark to the DreamWorks family, and to recognize the current team for their tremendous contributions to the company. With these new changes, coupled with our other incredibly accomplished recent senior hires—Michael Francis as chief global brand officer and Margie Cohn as head of television, I’m very excited about the stellar calibre of our overall executive leadership team.”

Zoradi is a 30-year veteran of the motion picture industry. He was instrumental in the start-up of Walt Disney Home Entertainment and The Disney Channel. He previously served as GM of Buena Vista Television and president of Buena Vista International with responsibility for the international theatrical and home entertainment marketing and distribution of Disney, Touchstone and Pixar films, and most recently, served as president of Walt Disney Studios Motion Picture Group.

He said: “I am enthusiastic about the opportunity to join the talented DreamWorks team at a time of remarkable expansion and growth for the company. DreamWorks’ family of beloved characters and stories are known around the world and I look forward to helping to build and expand their reach with new businesses and venues.”

In the past 18 months, DreamWorks Animation has been executing its diversification strategy, including building a television division committed to more than 1,100 episodes of original programming, new initiatives in the location-based and retail entertainment divisions, a brand new in-house publishing arm, global growth in its consumer products business, as well as growth in the online space with the acquisition of AwesomenessTV and the launch of DreamWorksTV.