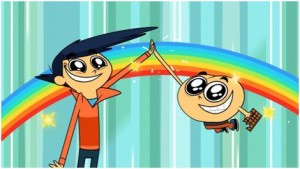 Co-produced by Nelvana and Studio Moshi and in association with Scholastic Media, The Day My Butt Went Psycho follows the hilarious adventures of Zack and his best friend (and butt) Deuce. Together with fellow young butt fighter Eleanor, these heroes navigate a world where humans live cheek to cheek with their butts in a sometimes troubled world. The series is based on the best-selling books created by one of Australia’s most popular children’s authors, Andy Griffiths and published by Scholastic in the U.S. and Canada and Pan Macmillan in Australia.

The series kicked off in Australia on Nine Network last September and premiered in Canada on Teletoon in June 2014.