Comic Con India is all set to host Bangalore Comic Con 2014 to entice Bengaluru’s audience with its biggest pop culture event of the year. The convention will take place at White Orchid Convention Centre from 12-14 September 2014 between 11:00 am to 9:00 pm; Bangalore Comic Con will now be of not 2, but 3 days of crazy fun.

Bangalore Comic Con 2014 will be hosting one of its kinds, interactive and experiential 50 Hours of Programming through panels, launches, gaming, video hangouts and more. Famous international personalities like Dan Parent, an American comic book artist and writer best known for his work for Archies Comics; David Lloyd, a British comics artist best known as the illustrator of the story V for Vendetta; Rob-Denbleykar, Co-Creater of Cyanide and Happiness; Peter Kruper, an American cartoonist and illustrator, Best known for his work in Spy vs. Spy series; will be attending and taking special sessions here.

There will also be an exclusive live chat (via satellite) with the one and the only Neil Gaiman, an English author of short fiction, novel, comic books, graphic novels, audio theatre and films.

Jatin Varma, Founder, Comic Con India, shared, “We are extremely excited to kick of our 3rd edition of the event in Bangalore, the past one year has seen a dramatic expansion of our shows and Bangalore fans are going to experience it now. We are bringing over everything from International guests to exhibitors, activities; this will be our biggest show till date. We look forward to having fun with all the fans in the city next month!” 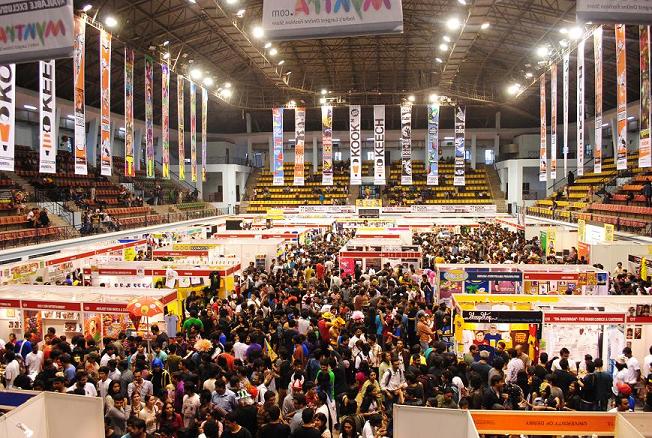 Bangalore Comic Con will be a ticketed event now onwards, to further expand the scope and size of the event. For Bangalore Comic Con 2014, Tickets will be available online via Book My Show as well as at the Venue. Only a limited number of VIP tickets will be issued. The tickets would be priced at Rs 250 per day – Online and Rs 300 Per day – At the Venue and Rs 650 for the Super Fan VIP Ticket for all three days. Super Fan ticket offer is available in limited numbers and can be booked online only; these will not be available at the venue.

Cosplay (Costume Contest), one of the major attractions at Comic Con India, will continue to give assured prizes to everyone in costume. Comic Con India has created five categories to increase one’s chances of winning gifts. Each day, one winner will be chosen from each of the five categories:

All 3 days, one lucky winner out of the chosen 5 will get an awesome chance to win a special grand prize!

For the sheer love for Comics, more than 15 new titles are being planned to get launched at the convention. Ravanayan Finale – Part 2,  Aghori – Issue 11, Odayan II – Yuddham, The Kaurava Empire, Rumi by Sufi Comics and The Caravan Prequel will be among the most awaited and exclusive book launches at the convention. 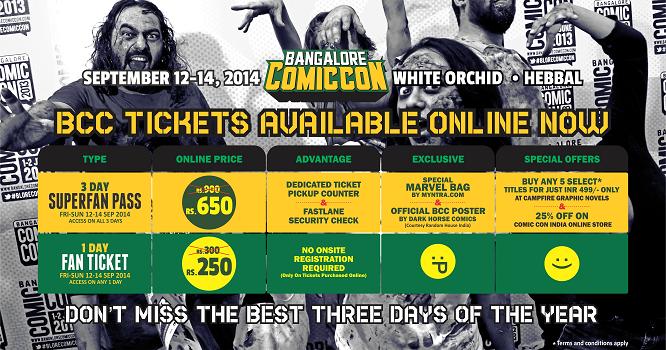 There will be International Exhibitors like Cyanide & Happiness, a famous webcomic and 3D Sense Animation, a leading digital arts school in Asia, bringing international content from all across the globe, especially for Bangalore.

At the convention, there will be some Awesome Anime & Manga Merch from Japanese Merchandiser IINE Toys, along with the best and most exclusive International merchandise at the convention from across the globe. Also, there will be exclusive Indian merchandisers including Kook N Keech by Myntra, Wacom, Bombay Merch, Collectors Heritage, Hysteria, Chimp, Chumbak, Keep Chilling, Wear Your Opinion, Planet Superheroes, Lazy Ninja, Graphicurry, Carmocrat and lots more!!

Comic Con India is dedicated to creating unique events and giving the fans, exhibitors and partners a platform to celebrate their undying love and passion for comics & pop culture. Comic Con India is dedicated to expanding India’s popular culture by creating high profile events that cater to fans of not only comics, but also, gaming, movies, television, merchandise, toys & more.