The comic that made its debut back in December 2014, has gone out to become a global sensation as it tackles the problem of sexual violence particularly seen in India. The comic book is none other than Priya’s Shakti which highlights the threat of sexual harassment and violence that women face on a daily basis unless deeply rooted patriarchal norms are challenged. Created by Ram Devineni and Dan Goldman, just like the protagonist Priya who’s the new hero for a modern India, the comic book uses the leading augmented reality app Blippar to bring animation, videos, real-life stories, and other interactive elements to life.

And now, after the success of their first comic book, Priya’s Shakti will be seen once again as the comic gets a second chapter Priya’s Mirror. AnimationXpress got to learn that funding this project is the World Bank itself! To get a deeper insight on this deal, we got in touch with the director, producer and co-writer of Priya’s Shakti, Ram Devineni.

“Priya’s Shakti is now part of the World Bank’s WEvolve Global Initiative, which is aimed at changing attitudes and behaviours that lead to gender inequities, including gender violence,” says Devineni.

According to WEvolve, “young men and women have the opportunity to challenge and change social norms, and today’s digital and social media gives people a reach and a power that is unmatched in modern history.” WEvolve provides a platform to empower young people to open their minds, become leaders of a new era, engage their peers and elders, and think and act differently.

The first chapter of Priya’s Shakti is available for free online and the hard copies were also distributed at free of cost. Creating and publishing comic books aren’t easy on the pockets and getting funding from World Bank is definitely an added advantage. 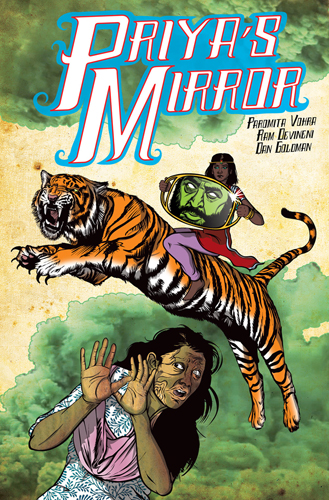 Not disclosing the fund amount, a proud Devineni comments, “They are offering direct funding support for the creation of chapter two – Priya’s Mirror, but what’s more important is that we get to work with the remarkable team at WEvolve and reach a wider audience. They are assisting us in marketing the comic book and also finding funding partners to continue the success of the comic book.”

There were also talks of coming up with an animated series but it fell through as Priya’s Shakti decided to push the series back to after they release the comic book. There were several reasons attached to this decision. The cost of creating an animated series was too high and they did not have the partners in place to produce it (although the team felt it would be popular). Equally important is that they wanted to focus on creating more stories addressing gender-based violence through the comic book. “I think doing an animated series or even just one animated film should be done after we have produced enough comic books and made Priya more popular in India. “

The involvement of World Bank on funding a comic book in itself is a big achievement and a happy Devineni mentions, “Though the details aren’t clear yet, what’s important is the fact that after only one chapter of Priya’s Shakti, we have attracted the attention of a major global organisation like the World Bank, which believes in the mission of the comic book and its potential to inspire and challenge people in India and abroad to address the problem of gender-based violence.”

The next chapter – Priya’s Mirror has been written by Paromita Vohra and Ram Devineni with Dan Goldman providing the artwork. Blippar will once again be creating augmented reality for their print copies. The story is about how Priya joins forces with a group of acid attack survivors as they fight against the demon-king, Ahankar, and his tyrannical hold on them.

Priya’s Mirror is set to release on 16 September at Mumbai Social Media Week.