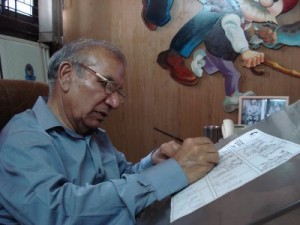 One of India’s most successful Indian cartoonists Pran Kumar Sharma passed away on Wednesday (today) at the age of 75. Pran was the man behind the famous comic series Chacha Chaudhury. His others famous characters included cartoons like Shrimatiji, Pinki, Billoo, Raman, Channie Chachi among others.

He was born on 15 August, 1938 in the small town of Kasur, now in Pakistan. The family moved to Gwalior after partition of the country. He graduated with a Master of Arts (Political Science) degree and then completed a four-year course in Fine Arts from Sir JJ School of Arts, Mumbai.

Pran began his career in 1960 as a cartoonist for the Delhi-based newspaper Milap with comic strip Daabu. In 1969, he sketched Chacha Chaudhary for the Hindi magazine ‘Lotpot’, which made him famous.

“Art has visual, no words. Literature has words, no visual. Comics have words as well as visuals. This accounts for its popularity,” said the well known cartoonist who remained a craze among young children with his comic characters.

He received a Lifetime Achievement Award in 2001 from Indian Institute of Cartoonists. He was also included in People of the year 1995 by Limca Book of Records for popularizing comics in India.