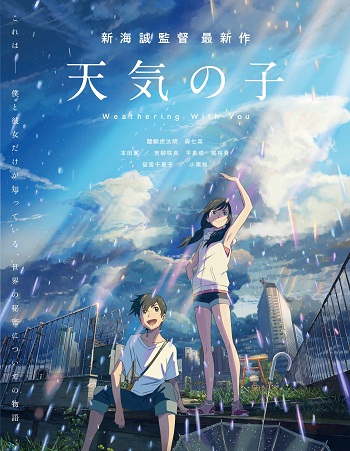 The highest grossing Japanese animated feature film Weathering With You is all set to release in India this October.

Directed by Makoto Shinkai (Your Name), in association with Toho Co., Weathering With You will be distributed by BookMyShow and PVR Pictures-backed theatre-on-demand platform Vkaao across 20 major Indian cities.

Talking about releasing the film in India, director Shinkai said, “Ever since the petition has occurred in India, I have been receiving a lot of messages from Indian fans who are eager to watch the film in movie theatres. I have been overwhelmed by their pureness and passion. Thus, I replied to them that I would be very happy if I could release Tenki no ko in India. I’m gonna talk to our Japanese distribution company.  Now, I feel I could carry out the promise with the fans in India.  I am very much looking forward to the film will be well received by the fans who live in the country of movie and mythology.”

A true reflection of Vkaao’s constant endeavour to cater to cinema-lovers’ demand, the announcement follows an online petition to bring the film to India. The petition which gained momentum post the film’s trailer release, went viral in April this year with over 50,000 signatures. The film has so far collected almost six billion yen (over USD 55 million), making it the highest grossing Japanese anime film.

“Vkaao is proud to bring the highest grossing Japanese anime film ‘Weathering With You’ to India. Directed by Makoto Shinkai in association with Toho Co., the film has garnered about 53,000 online petitions so far, to get an official India release. Staying true to our promise of bringing world-class entertainment on demand, we look forward to the film’s release in India,” added Vkaao  co-founder & CEO Vaibhav Lal.

The tickets for Weathering With You will be available on Vkaao and BookMyShow.