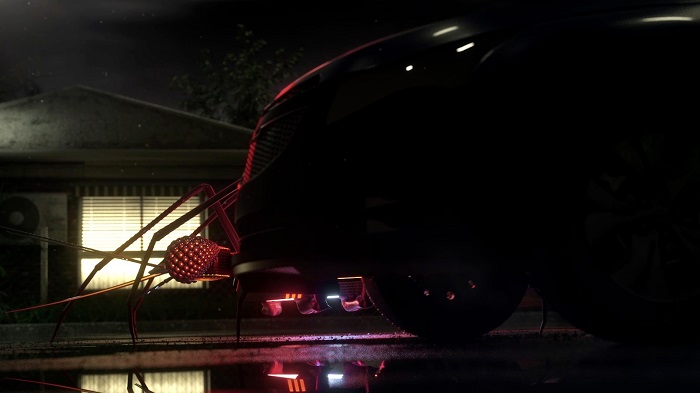 The ad takes on a classic thriller look and storyline, building up suspense and slowly revealing the hybrid creature. For the different style, Jumbla’s creative director Oz Smith cited b movies, retro thrillers, 80s horror films, and even Hollywood blockbusters among his influences.

“The team created a story where light represented money – the parasite’s prey,” Jumbla producer Natalie Studdert said. “The pokies parasite quite literally sucks the light out of the low socio-economic areas of Tasmania,” she added.

Two creatives were tasked with developing the scenery, texturing, and lighting, while another creating the poker machine parasite. For added authenticity, nearly every aspect of the location, from the homes to the bus stops, was based on suburban Tasmania.

“Along with references supplied by the client, we also looked on Google Maps to get a feel for the area and ended up modelling most of it ourselves,” Oz said. Additional elements of the animation such as the texturing and lighting not only facilitated a more sinister mood, but also helped with the tight deadline.

“We were able to mask sections of the scenes and pull focus to the elements that needed more detail. The team at MONA were incredible to work with, giving us a lot of creative freedom, which meant we could focus more on the design and less on countless rounds of feedback,”Oz added.

Oz further quoted, “The scene where the bug sucks the life/light out of the Pristine Tassie poster was a key visual to explicitly sum up the message of the campaign.”

The commercial aired across the Tasman ahead of the 2018 elections and utilised light and dark to represent predator and prey as narrative devices.