In July, Netflix and acclaimed television producer, Shonda Rhimes, announced a new partnership to develop VR and gaming content for the increasingly popular video streaming company. Since then, the business has been tight-lipped about future efforts, leading many to believe that an official VR release was imminent. On the other hand, Netflix appears to have debuted its own VR game on Oculus Quest devices a few months ago, and it’s free. This begs the question: what is the future of cash games?

Eden Unearthed is a short but sweet interactive VR experience that has you piloting a futuristic motorcycle across a beautiful landscape inhabited by a race of easy-going robots. It’s available for free on the App Lab. The game’s mechanics are straightforward: players must navigate around various obstacles while collecting apples to use as biofuel to power their sweet ride. Your primary purpose is to travel as quickly and as far as possible. You’ll pass by several landmarks as you journey. Using your portable hologram gadget, you can discover more about this fascinating planet through a combination of 2D videos and narratives.

The game is based on the Netflix original show, Eden, which premiered at the end of May 2021. Eden tells the story of two robots, a thousand years after humans vanished from the planet. They discover a genuine human girl — previously lying-in stasis — during a regular assignment in the farmlands outside of Eden 3 and begin a journey to nurture her in secrecy.

As mentioned before, the game takes place on a planet devoid of people and run entirely by robots in the far future. You take control of a futuristic motorcycle and travel over a vast and ever-changing terrain, collecting apples for fuel and avoiding obstacles to achieve maximum speed without hitting anything. 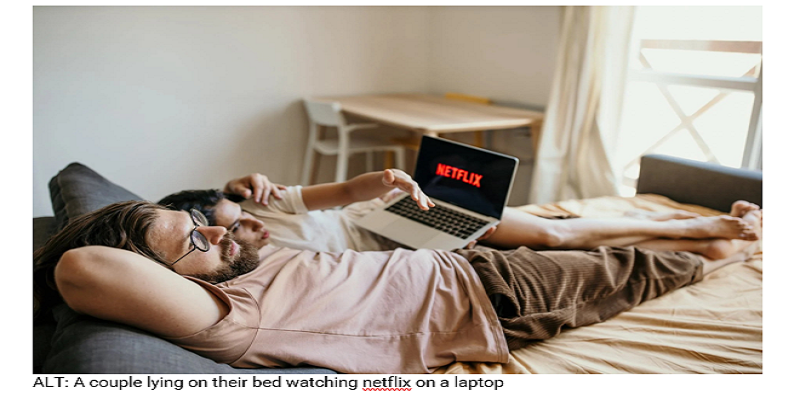 It would appear this is a route Netflix is now keen to explore, especially since hiring former Facebook Vice President, Mike Verdu. Verdu joined Facebook Reality Labs in 2019, at a time when the VR and AR divisions’ manager lineup had undergone multiple changes. Verdu previously served as a Senior Vice President for Electronic Arts’ mobile division as well as Zynga, EA Los Angeles, and Atari. He worked on games like Command & Conquer 3: Tiberium Wars as a product lead. In addition, he managed games and applications on Facebook’s VR/AR platforms and occasionally provided updates on studio acquisitions, content sales performance, and other topics throughout his time there. Verdu would frequently appear on stage and, and more recently on-screen at Facebook’s Connect VR developer conferences, where he would unveil new games and publishing arrangements.

Verdu’s exit from Facebook for Netflix came at a particularly fascinating time. According to Bloomberg, Netflix is considering expanding into the video game sector, and Verdu has been hired to take on the challenge. Vice President of Game Development will be his new title at Netflix.

Around the same time, it was reported that Shonda Rhimes, the creator of Grey’s Anatomy, is expanding her work into VR entertainment for Netflix. After the original agreement with Rhimes’ Shondaland Media concluded in 2017, the two are continuing their content relationship.

Taking it a step further

Netflix has dabbled in virtual reality over the years and has an Oculus Quest app for its streaming service. In addition, companies like Disney and tools like Epic’s Unreal Engine have made significant progress in incorporating VR headsets into production workflows in recent years, allowing creators to scout their shots and see virtual sets more easily. Still, streaming services have hit a snag when it comes to the viewing experience for at-home viewers.

Headset weight, comfort, and battery constraints make binge-watching, which Netflix and other streaming services largely rely on, impossible. However, that might all change in the coming months and years, as more comfortable headsets become available and major platform firms like Netflix look to collaborate with streaming services to create new experiences that remove some of the constraints that have previously limited the experience. But for now, we will have to settle for watching Netflix with our VR headset using the app.

Have you seen the Netflix-themed living room? You might have assumed that watching Netflix in VR would entail being put into a stretched-out, 180-degree version of your favorite show. Instead, Netflix provides opulence in this app. Furthermore, Netflix provides you with art. The television screen you’re watching Netflix on is around twelve feet tall, surrounded by exquisite stonework, and there’s a large three-paned window to your left that reveals the snow-capped mountains.

The Netflix virtual reality experience is more about traveling somewhere better than where you are right now than it is about being involved in the content. After just a few minutes in the Netflix app, you’ll swear you’re sitting in a beautiful cabin with vaulted ceilings. Netflix goes beyond what’s right in front of you, providing a truly immersive 360-degree experience. Take a look behind you. Take a look up. It’s one of the few apps we’ve seen that cover all the bases.