In a recent development, DreamWorks Animation has revealed that Oscar, Golden Globe and Tony Award nominee Anna Kendrick is lending her voice to ‘Poppy’, the relentlessly upbeat princess at the center of the studios upcoming musical comedy ‘Trolls.’

Scheduled for a 4 November 2016 release, DreamWorks’ Trolls is described as “a fun-filled adventure that finally reveals what Trolls fans all over the world have been waiting for … the story behind the beloved, colorful nature of the Trolls trademark gravity-defying hair!” Mike Mitchell (Shrek Forever After) will helm and Gina Shay (Shrek Forever After) will produce. 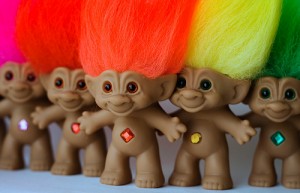 “Anna has proven herself to be a brilliant actress with an amazing singing voice. She’ll inject Poppy with the exact mix of spirit, sass and song that will no doubt give a whole new life to the iconic Troll dolls,” said Mike Mitchell in a statement.

The Troll doll phenomenon dates back to 1959 when Danish fisherman and woodcutter Thomas Dam, too poor to afford a Christmas present for his young daughter Lajla, carved a doll for her based on the legendary Scandinavian troll. This modern-day Geppetto couldn’t have imagined that the Troll dolls would soon become one of the biggest toy crazes of the 1960s. The Trolls experienced resurgence in the 1990s and their uniquely endearing faces and shocks of colorful hair continue to capture the hearts and imaginations of fans around the world.