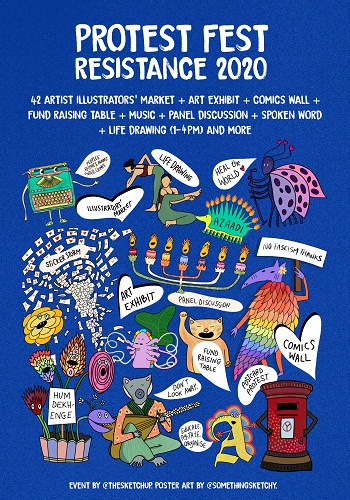 For the past few months, the country has witnessed a lot of agitation and uproar over the CAA (Citizenship Amendment Act) and NRC (National Register of Citizens). Several incidents involving violence have arisen which directly or indirectly have a connection to this political move. However, this move has brought the masses together in unison like never before, all across India.

Many of the animators, comic artists and illustrators around India have also not shied away from picking a side and raising a voice against CAA and NRC through their artworks, while some depicting the current  scenario in India.

Protest art has been in vogue for quite sometime now with social media handles flooding with illustrations, sketches, posters, animated clips and many more. Now these creative minds have gone a way ahead by participating in Protest Fest, an art day themed around Protest Art on 1 February, Saturday in Bengaluru.

The event will feature :

Hosted by illustrator, Madhuvanthi Mohan (@somethingsketchy), Protest Fest is organised under the banner of an illustrators’ group called The Sketchup (@thesketchup), run by Mohan, where she brings the artist community together for intimate gatherings as well as larger art shows. Said she why such events are the need of the hour, “So much amazing protest art has come out of the Indian artist community lately, and this was a great way to bring it all together and showcase it. We are a free country after all and we have a right to share our opinions even if the government may not agree, that’s what a democracy is. It’s also a way to gather like minded folk together, to find strength in each other and keep our mental peace while continuing to stand up for what we believe is fair and right.”

Mohan started The Sketchup in 2014, after she quit her day job of three years as a copywriter in an advertising firm, to get into full time illustration. “I missed being around other artists and that feeling of the artist community. Since then I’ve done about 30 events across Bombay, Bangalore, Mysore, Goa, Delhi and Kohima in Nagaland. I love to travel and try to bring the artist community together wherever I go,” added she.

Here’s what they had to say for being involved in a such an event :

Bhattacharya – “Happy to be displaying alongside such a good lineup of artists, glad to be a part of a broader pattern of artists making art that doesn’t look away.”

A post shared by Upamanyu Bhattacharyya (@upamanyubhattacharyya) on Jan 7, 2020 at 3:33am PST

Daruwala – “I’m honoured to be a part of such an important event, especially in the context of today’s social climate. It is the responsibility of every true artist to speak for liberty and truth.”

Chakravarty – “I’m extremely proud of being with this event where artists are making a statement and showing some spine. I congratulate Mohan’s efforts to curate the whole display.”

Shaheen, the fastest hunting bird in India, a nemesis to the invasive feral pigeon which is a growing threat to wild bird diversity. What embodies the spirit of this rebellious raptor better than the women of Shaheen Bagh? Thank you for reminding India of how to fight the right fight. Artwork available for free usage; please email me on rohanchakcartoonist@gmail.com. #shaheenfalcon #shaheenbagh