Animation Latest News
Amid the pandemic, economic downturn, super cyclones, locust attacks and other issues, On 27 May, an oil well, Baghjan EPS, blowout led to a gas leak in Tinsukia, Assam. After two weeks of rushed relocation plans and efforts to fix the leak, the well caught fire on Tuesday, 9 June around 1:14 pm.  This fire from the oil well, which is very close to the Dibru Saikhowa National Park, has wreaked havoc on the ecosystem of the wetland and has devoured the lives of flora and fauna. To draw some attention to this horrifying incident which didn’t get the coverage it deserved from the mainstream media, independent animators and graphic designers based out of Kolkata, Saswata Mukherjee and Susruta Mukherjee have created an animated short film, titled The Reddening.


The Reddening. Sound On ? By : @bob_almost and @almost_bobby Dedicated to @green_humour who keep us aware on how the people in power with the help of “the champion of earth” are waging a war on the environment. Despite a lot of environmentalists having strongly campaigned against it, about a month back, Oil India Limited got clearance from the government for drilling of oil in and around Assam’s Dibru Saikhowa National Park. On May 27th a massive blowout was reported at one of the gas producing wells which resulted in an intense fire killing fishes and river dolphins(including the endangered species of gangetic dolphins) besides displacing around 7000 people from the nearby area. Even a day back there were reports of the oil well fire still raging on. If we don’t hold the government accountable for the destruction of natural habitat, if we don’t raise our voices against how nature is sold every now and then to businessmen, we would only get closer to the already impending doom. . . . . #assam #assamburning #baghjanfire #baghjanoilfield #climatecrisis #climatechange #animation #shortfilm #red #environment #saveassam #climatestrike #bobalmost #almostbobby #bobbobbysketches #bobbobbyartworks #bobbobby #nature #clinatewarrior #greenhumor #resistcapitalism #satire #instaart #art #india

Dedicated to comic artist Rohan Chakravarty (Green Humour) whose works keeps them aware of how the people in power are waging a war on the environment, The Reddening shows how natural resources are being exploited and the sorry, sad condition of the innocent creatures.  Said the Mukherjee brothers, “The animated short was to draw attention to Assam Gas Leak which didn’t get enough coverage in the media. The images coming from Assam disturbed us to the core and we wanted to make something on it. The Government has been selling Nature to businessmen despite environmentalists raising their voices against it. Most people don’t read much news these days we feel, hence we thought of making a short animated video on it so that it can direct people to some articles on the incident. Chakravarty, a brilliant cartoonist, keeps us updated about things being done to the environment by people in power. This one was majorly inspired by his works.” Animated in Photoshop and edited in Premiere Pro, this animated short took them about two days to complete. They visualised the scenes in their minds, discussed, and started animating right away the brothers were bogged down with other pending works. The Reddening shows how with no proper conservation plan in place and lack of proper follow of guidelines for eco-sensitive zones, in most of the cases a gas pipeline so close to the sanctuary, which was not taken nicely by environmentalists and locals that the oil drilling might turn out to be risky, was like a time bomb waiting to explode. “The well is right next to the core area of the national park and had an impact. The wind has not helped things either. The fire keeps raging still and the gas leak has spread over a wide area,”Assam environment minister Parimal Suklabaidya told TOI. 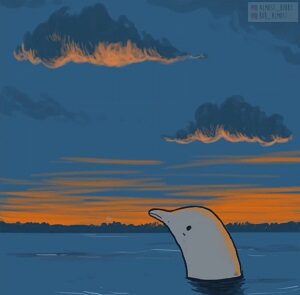 The ravaging fire has killed fishes and river dolphins (including the endangered species of gangetic dolphins) besides displacing around 7000 people from the nearby area. The oil well fire is still raging on the gas still spreading. “The Dibru river is full of dead fish. Two days ago, Gangetic river dolphins surfaced. A thin film of oil has covered the river,” informed Nirantar Gohain, an environmentalist from Natun-Rangagora, a village on the periphery of the Dibru Saikhowa park revealed to TOI.  Questions and eyebrows are being raised at the allowings and many suggest that to prevent disasters like the Baghjan gas leak and fire, an eco-sensitive zone, a national park, was put to threat to “act as shock absorber”. The animated short depicts points at that possibility. The Dibru Saikhowa forests were notified as a wildlife sanctuary in 1986 and a biosphere reserve in 1997. 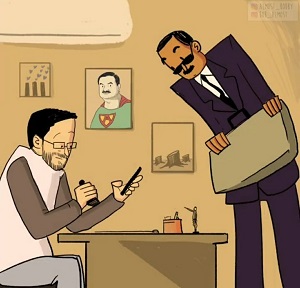 “We just wanted to make people aware of what’s happening and wanted to hold their attention till the end. People need to read, know and educate about what’s happening around us. Looking away from the climate crisis and people who are helping to bring it sooner to us, won’t save them. If we don’t hold the government accountable for the destruction of natural habitat, if we don’t raise our voices against how nature is sold every now and then to businessmen, we would only get closer to the already impending doom,” concluded the brother duo. We, the humans have failed Nature and other living creatures over and over again. All of us have blood on our hands of those several innocent creatures and flora. If doing business at the cost of Nature continues, we’ll perish sooner than ever. It’s high time we undo our mistakes, learn from them and create a healthy balance to thrive and live.