Animation Latest News
Starting from 25 March midnight, we are now undergoing lockdown 4.0 till 31 May 2020. In the meantime, a lot has happened. While we, “the privileged” class are already getting tired of the “boredom”, “social distancing”, “staying at home” and other things, there’s a large number of distressed and helpless people for whom “home” and being quarantined is a luxury. Yes, I’m talking about the migrant workers. Having lost their jobs, no food and even no permanent shelter, these poor souls were forced to walk back to their respective homes when the authorities and Government failed to provide them with basic transport during lockdown while the NRIs were airlifted from different parts of the world. 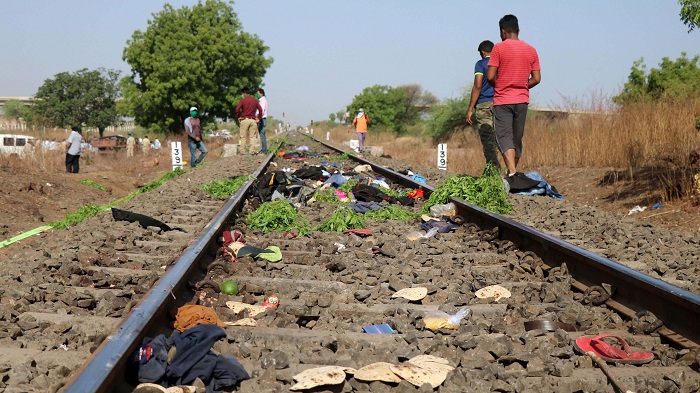 With pangs of hunger and helplessness, these workers walked day and night to reach their ‘homes’ or ancestral places. ‘But what are flies to wanton boys?’- 16 migrant workers were run over by a goods train on 8 May in Aurangabad when they fell asleep on the track being tired, unknown of the fact that Goods trains were not stopped during lockdown. There has been a lot of writing and criticisms across the media and social media platforms, but here’s an animated short of 60 seconds created by former Disney India animator, Debjyoti Saha that gives you a reality check and a tight slap on your privileged demands. Part of the Korona series, this one is the fifth of the slot which portrays a grim, stark sad reality of the migrant workers. The video has gone viral on social media with 23 lakh views on Instagram itself with multiple shares on Facebook (23K). Speaking about the animated video Saha told AnimationXpress, “I wanted to talk about the country-wide migrant crisis since its inception. Strangely enough, I noticed a pattern of news getting constantly irrelevant with new news. Even though the various problems of the migrants were highlighted at various instances, the urgency died away with new articles and features. I’m sure this article will meet a similar fate, but their misery won’t. This video was created to spread the message of acknowledging our privilege and using it to better the lives of the unfortunate in our own ways. Public memory is short. This news will soon fade away, but I hope the message stays.” The Korona (meaning “Don’t” in Bengali) series features five films till now, each focusing on a deep rooted problem in today’s society in the light of the global pandemic. Starting with the excessive propagation of fear, to the doctor’s plight when they were garlanded with a pat on the back but their needs weren’t met with, to the extreme racism and Xenophobia that people in the North-East had to deal with even with the low amount of cases there, the ridiculous long queues across the country that left social distancing go for a toss due to the opening of liquor shops, and the crisis of migrants.


Korona 2.0? With Lockdown 3.0 coming into effect, people are losing it entirely in their homes after running out things to do. Right then, they are given the worthy task of single-handedly pulling the falling economy of the country in lockdown, and dedicated countrymen step out in large numbers across the country, and line up in front of liquor shops through the day. A brilliant masterstroke indeed. But in this thirst and desperation, people seem to have forgotten the very basics of safety, rows of people stacked together in qeues stretching kilometers long, not for food, water, calamity or heading home, but for a few litres of a liquid that’ll kiss their problems goodbye (till the next morning) Cheers? #animation #2danimation #animationfilm #animatedseries #indiananimation #korona #korona2.0 #coronavirus #corona #lockdown #economy #alcohol #oldmonk #possession #nocountryformigrants #poverty #stayhome #staysafe #staypositive #staydrunk #detox #covid_19 #india2020 #pandemic #dosanddonts #artistoninstagram #artoftheday #animatorsoninstagram

Added he, “Migrant workers have been walking thousand miles to their homes without a vehicle or even a pair of slippers in many cases. As the government and few other organisations/people offer help in pockets, it is not enough to help the entire population of migrant workers in the country. On the other hand, I see the people fortunate enough to be in the comfort of their homes, including me, are pouring their hearts out on social media, cribbing about getting bored at home doing household chores, finding their inner chefs cooking up a storm, overhoarding “essentials” in fear of missing out and complaining about the WiFi/internet connection. I’m sure the lockdown is tough to deal with for every individual, but if we think about the problems the less unfortunate are facing, most of our problems will seem frivolous and petty. This sparked the idea of creating a film that would reflect the contrast of these two lives.” Recently Bollywood actor Sonu Sood hired buses and sent a large number of migrant workers back to their homes along with essential items. The films are not production heavy and are mostly idea driven. They are second/minute-long films with a satirical take to realise the deep rooted issues that’s happening around us in society. It took him about four to five days to complete each film. They were animated in Adobe Photoshop and basic composited on Adobe After Effects. “The fourth animated short in the series depicted rightly how people rushed like madmen to quench their thirst after a long dry spell, risking their lives and others’ to the virus. Apparently it was great for the economy but might have been in poor taste, to be honest,” shared Saha. The next episode of the Korona series is coming soon, before the lockdown is lifted. These shorts make us think that the things we are complaining about may mean the word to somebody. These are challenging times, but one thing the pandemic has taught us to be kind, empathetic, compassionate and be grateful. Let’s come out as changed individuals and let’s not take these people and their lives for granted.