After witnessing massive success with Dhoom: 3 The Game, that crossed 11 Million downloads across multiple platforms, Udupi based 99Games, game-publishing subsidiary of Robosoft, has

Released on iOS, Android and Windows Phone platforms, in the game play of ‘Million Dollar Arm Game’, players test their pitching abilities by passing through a series of challenges, where the goal is to knock down the targets. In this race against the clock, Top Scorers earn a place on the Leader boards.

Thrilled about the very first International project, Rohith Bhat, CEO of 99Games, shares his thoughts with AnimationXpress.com “We are certainly excited about this game! It’s our very first plunge into Hollywood gaming. We got into this venture when Seven Figures Management (IP owners of the Million Dollar Arm Franchise) and Microsoft got us onboard to design and develop games around this incredible franchise. We were elated and took up the opportunity; and  2 months post development are ready with a robust game that we believe will be very well received across all platforms.”

Rohit, what was the brief given to you and the top points that you registered in mind for creating the game?

We were briefed about the franchise and the story of baseball pitchers Rinku Singh and Dinesh Patel who were discovered by sports agent J.B. Bernstein through the reality show. The link to the official movie trailer by Walt Disney was also sent across. This gave us an insight into the story and theme of the franchise. Based on this we started building concepts for the game.

Time was not a luxury with this project, and we started sharing concepts with Seven Figures Management even before signing the formal agreement. We had a few thoughts: The game should be simple, addictive and lend itself well to the core theme of the IP.  7FM liked our concepts and that’s how we got going.

How many artists and worked on the game and tell us about the research?

Sure, we had 7 artists working on this game right from the beginning. The main reference that was provided to us was the trailer to the movie. We knew we wanted to create a game along the baseball theme to complement the franchise and the movie. We wanted the game to be casual, appeal to youngsters and also be simple to play but hard to master. We took the Flappy Bird approach on this one and built levels with increasing difficulty as you progressed.  Players would improve their skill if they kept playing the game. 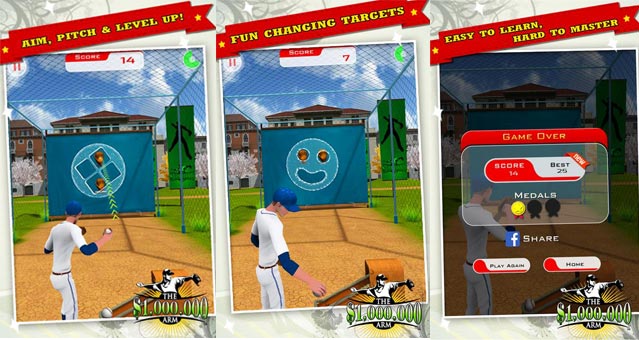 We would like to know about the technologies used?

We’ve used Maya for Animation and Rigging. Maya is a good animation tool and provides flexibility in tweaking animations and also helps optimize them for hand held devices. We could create the art and animations in a short time with the quality as is seen in high-end devices.

We developed the game using Unity3D mainly because it is straightforward to deploy on multiple platforms with minimum hassle. Optimizing for memory and performance is a huge challenge but nothing that cannot be surmounted with dedication and hard work.

We took a streamline approach; multi-tasked and worked round the clock to get the game in the form that it is in today. It appeared like a humongous task when we started off but the team has been awesome and all credit goes to them in making this appear not so tedious after all!

How has this very first Hollywood project evolved 99Games?

We had some great exposure while working on our first Bollywood game, Dhoom: 3 The Game.  It was our first experience working with a movie studio. That gave us a good insight into creating games for movie IPs. We learnt a lot there and that helped us when got into our first Hollywood venture with the Million Dollar Arm Game.

With the Million Dollar Arm Game, we had a whole new different experience. We got into this venture only in late February and had just about 2 months to have the game ready before the movie launch. That aside, we had to coordinate with clients who were not based in India. This may appear to be quite trivial given that there is absolutely no barrier to communication. But, we had to adhere to a very stringent timeline and I think it disciplined us a lot! The team at Seven Figures Management was also very prompt in providing feedback and it was a very delightful experience working with them. We are humbled by this experience and look forward to seeing positive responses for the game.