Two long decades in an industry that is only gaining ground now, with importance and acceptance coming slowly, but this man already has three national awards to show for his work. Having spent nearly two decades in the VFX industry in the country, he has been one of the crucial blocks in building this nascent but vital industry. Indian Artists Computer Graphics CEO Srinivas Mohan has attempted challenging projects such as ‘Enthiran’ (‘Robot’) and ‘Sivaji’ in the past. 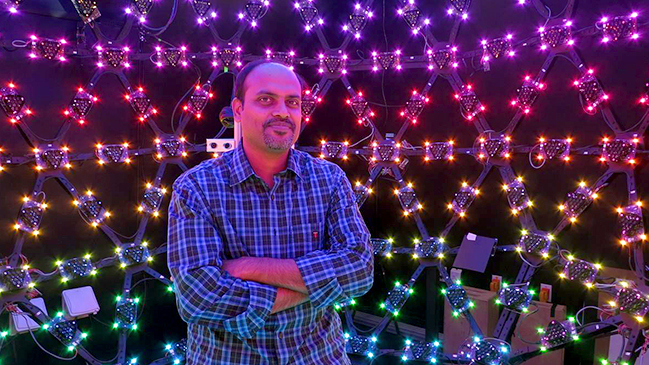 His latest outing brings has him taking his art a level higher with not just supervising the VFX but also assisting in the special make up that was required for the recently released movie ‘I’ (Ai) directed by the acclaimed personality Shankar. Shot at exquisite locations in China, the revenge movie has stunning visual effects and make up done by international houses Rising Sun Pictures and Weta Workshop respectively.

In an exclusive interaction with AnimationXpress.com’s Sidharth Iyer and Vishaka Chakrapani, Srinivas sheds light on the making of the movie ‘I’, the various VFX houses involved in the process, the special make up required for the movie and the challenges that came in the way.

You have been associated with many of Shankar’s earlier films. How was it working with him once again for the movie ‘I’?

It was great working with him again because he is a guru in the VFX industry. He not only encourages VFX but also gives it a lot of priority and he knows it can be used well to enhance its grandeur. Shankar is very clear of what he wants and especially in the VFX industry, it is necessary to have clarity from the director. So after he locks the story, he never changes it, this helps me in working freely and also try getting good quality of effects for the movie.

How did the story evolve and what were your inputs in executing it?

He told me this hunchback story 10 years ago. What first struck me was that special make up would be a crucial element. I suggested Weta Workshop to him, but due to their packed schedule, it took Weta nearly six months to agree on the project after several meetings.

Although I needn’t have done that as a VFX supervisor, I was able to help for the requirement. That is one big input in the film.

The Mersalaayitten (Issak Taari) song VFX was done by Rising Sun Pictures (RSP). The first thought was to express Vikram’s love for Amy by making him visualise her in even inanimate objects. We didn’t want the transformations to resemble those of Transformers (which is an easy parallel to draw). The main difference is that in this song the transitions are mechanical to organic while in that it is mechanical to mechanical. We took Amy to Australia and scanned her for the scenes and used Maya for textures.

The scene where Amy becomes a fish will also drive people to think of the similarity with ‘Mystique’ from the X-Men series. In the song where Amy also takes form from sprouts, we tried to bring her up from them straight but it didn’t seem to work out; so we requested the choreographer to help in getting some spiral transformation, which looks great in the final movie.

In the same song, there is a portion where Amy takes form from the water at a ‘Dhobi Ghat’ where the transformation is entirely computer generated (CG) and so is the foam that covers her body. It took a lot of time to get the shade on the foam right as well.

What were the inputs provided by the various VFX houses?

RSP has done eight shots in the song mentioned earlier. Initially we had a discussion on the need for such expensive transitions, but I insisted on them because without the transition, it would have looked like she is wearing a costume which wouldn’t have really worked for the amazement that we wanted people to experience.

Certain scenes were pre-planned such as the Mersalaayitten song, the bee sequence, electric shock scene and the wings in the ‘Beast song’. The body hair part was attempted as special make up by Weta but they couldn’t give a lot of time for it. So it was 50 per cent real and 50 per cent CGI.

Apart from the song, the Honey Bee sequence was executed by Rhythm & Hues (Hyderabad), who also helped out with the climax scene of the wide-angle flowers that were in CG. The exterior of the house where Amy is taken after being kidnapped is also done using CG, along with the bridge and a few other shots which were delivered by FutureWorks.

The set extension for the ‘Beast song’, fire enhancement and the end shot of Upen Patel being electrocuted on top of the train was delivered by Prasad EFX, who have done over 50 per cent of the movie in all.

Other studios that contributed to the project were: Criya – wings, hair enhancement; Makuta worked on the bloated lips and the spread of the virus shots apart from the hair growing scene; Firefly helped out with some of the train electric shock shots and a few lip sequence shots; Creative Art Concepts worked on the effects for the song ‘Ladio’ and a few climax flowers in CG and finally the roof top bicycle fight sequence was done by Lorven Studios in CG.

How many VFX shots were used in the movie?

About 1000 VFX shots were executed – which include the eight shots of transition, 25 to 30 shots on the honeybee sequence, 40 shots on the electric train and over 50 shots on the ‘Beast song’ – these were the major sequences in the film that require mentions.

For the kidnapping house, we had a theme park where the water body existed without a bridge and we arranged for a wooden bridge to get the right lighting and then created a CG bridge and building while we shot only with trees. The ‘Aila’ song has a sequence shot against a European background which has actually been done against green screen.

At the China location, the entire background is done in CG to enhance the flowers and the colours. When we went to shoot, there weren’t any flowers, so we shot with green background and then we replaced that with flowers. The climax scene also had no flowers on location, but we added them in post.

What were the challenges with the fight sequences?

Our main challenge was to remove the rigs. The entire roof top fight scene in China was entirely recreated and enhanced using CG. We placed a simple texture on plain flat surfaces on which they performed all the stunts and then we took care of the rest in post.

The similar technique of clearing the rigs was also used for the scene where we see Vikram fighting off the goons during the Mr Tamil Nadu competition in the earlier half of the movie.

How many days were spent in shooting for the major VFX sequences and adding the post production effects to them? Were you able to meet the deadlines?

There are two parts for the whole movie – planned and unplanned shots. The flowers and roof top shots weren’t planned when we commenced the project, but only developed in the process as we thought it would add a whole new dimension to the scene. The planned ones were done on time and were much easily executed because of the strong previz and storyboard understanding that we already had in place. In all about 400 people have touched this film in some way or the other, and the shoot took five months on location, whereas the pre-production took a year and the VFX work took just under eight months.

How was the experience of associating with Weta Workshop? What were the challenges they faced?

From the very beginning they were clear of the things they needed from us and what they can deliver. They are one of the best professionals I have seen.

Makeup wise, the ‘Beast’ song took five hours to apply and two-three hours to remove. The major challenge they faced was the weather condition. Whatever they have done earlier have been in colder temperature. So when they came here, they had a lot of issues due to the make-up material notwithstanding the extreme conditions. So they had to take some assistance from local makeup artists in terms of getting some of the material locally to suit their requirements.

The beast song was shot in Chennai in Prasad studios for 15 days. We didn’t get a big set. So all the floors we had here weren’t enough. The art director Nick Pill took an empty place and made a realistic set with seven cranes. He created an entire floor just for the set. It’s a huge set.

On location they required one AC box constantly to keep the makeup intact, and after every take the actors had to rush to the AC box just to ensure they don’t spoil the make-up. They adapted a lot because of this condition and did an extraordinary job on the movie, which I guess is out there for everyone to witness.