Remember the days when we used to play card games? Animation Xpress recently interacted with one of the card game makers, Gaurav Bhagat who is the man behind the WWF Trump cards and has recently launched two new board games. Bhagat is also the founder of Gaurav Bhagat Academy which is a sales training and scaling institution.
Bhagat had an interesting childhood where at the mere age of 16, he launched the famous WWF Trump cards along with his younger brother who was 12 at that time. It was a huge hit back then and everyone used to have a pack, therefore no one could have imagined that it was created by a 16-year-old. And we finally get to hear from Bhagat how since then his journey to board games kicked off. 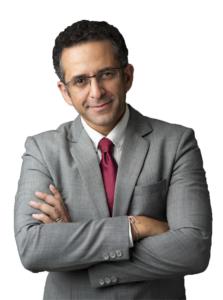 He shared, “My brother and I, both had launched the WWF Trump cards together in our respective schools. At that time, it was quite successful and done really well for someone who is still in class 11. After that, I made Trump cards and the stock market game in 1992. Post that, I had made 16 to 17 games for Leo Toys, which was India’s largest board game. Later, I took a break, and I was running Consortium Gifts and the academy and other things. Here’s when I got the thought that we need to do more in board games.”
Now Bhagat and his team have launched The Stock Market Game and Lakshya board games and have also applied for trademarks for the mechanism of Lakshya and other details. Now, the team is planning another game on entrepreneurship, sales and other topics. They aim to launch 10 more board games in the next year which will be available on Flipkart, Amazon and offline stores, retail outlets and the corporate market as well.

These days, everyone is spending long hours on screen even during family gatherings. This was one of the reasons which inspired Bhagat to launch these board games instead of its e-versions.

He shared, “We could have developed these board games in e-versions, but the thought process was that we wanted to launch actual board games which people could play together as a family. Of course, both the games that have been launched are educational. These are created by experts to make you an expert. The first one is a stock market board game. People think in stocks you only go up, there is easy money, and there is no virtual education on how the stock market works. They work on tips, YouTube advice or Whatsapp advice, and so on. All this is not 100 per cent correct information, and people lose a lot of money. The way the stock market game is different is that it also covers the cash play, which is the spot play that a lot of people understand. It is with your money, and it also covers other derivatives as it has more advanced levels. I don’t think any other board game offers this. So, this is the thought process behind the board games. Family time helps in educating the people, so they understand the mechanics of the market, derivatives, as well as spot play. Whereas Lakshya is a goal-setting game and goal setting is such an important aspect. A goal planner is such a valuable resource for so many companies around the world. We need to teach the young kids about goals, so Lakshya came in the way. Kids aged 11 to 15 worked with me on this game.”

The market has been waiting for quality board and card games. “People eye for quality games. I think engagement is most important, and if there is knowledge along with that, nothing can beat it. I see more companies using this as a gift to their employees, and so on,” he added.

The board games are available on Flipkart, Amazon, Shopify and Gaurav Bhagat Academy’s website. Also, it is available in physical stores in Noida, Bengaluru and Hyderabad. They are also planning to enter retail stores as well.

Target audience is varied for Lakshya, that is, kids from eight years to adults. However, for The Stock Market Game, they are targeting the 15 to 55 year age group; they would be fund managers, people who invest, family members, and so on.

Here is the excerpt of the interview:

Tell us more about the board games. 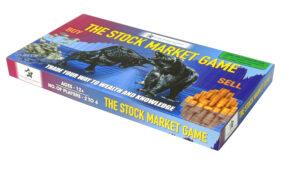 If you are a 90s kid, you must have played Money Circle. A multiplayer economics theme-based game that gave a glance to kids back then on how to grow your money from the money allotted and how to make the best use of the same. In today’s real-life scenario, with the rising popularity of the stock market, many people have started investing in the stock market to grow their money with the money they have. It’s not just any other investment mode but is a lot more that involves goal setting and chasing it with persistence and determination. In the Stock Market Game, there are two levels of play. The beginner level covers only spot equities purchases, whereas the advanced level includes futures purchases as well. So, regardless of your stock market knowledge, this game will keep you occupied for years. It’s a fantastic approach to study and teach about the stock market’s complexities. Two to four players can play this game. The first step is to determine one player who will be the banker and will handle all the money. The banker can and should also be one of the players who will play the game. The extra responsibility is to manage the cash, keep tabs on the trades, and issue chips. Movie-goers who are die-hard fans of movies such as The Pursuit of Happyness and The Wolf of Wall Street would very well understand the need for an engaging game to teach you about the nuances of the stock market. In both the movies, the main protagonists, Will Smith and Leonardo DiCaprio respectively, invest in the stock market to come out of their financial instability with sheer grit and determination. 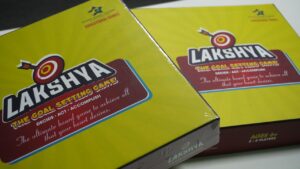 Setting goals is a beautiful thing; everyone knows it should be done, but few people do it, mainly because it’s made out to be difficult, tedious, and uninteresting. The goal-setting game Lakshya aspires to revolutionize all of that. It’s entertaining, engaging, and scientifically sound. His board game expands on that premise by making the entire procedure even more enjoyable and straightforward. It can be played by persons of various ages, from six-year-olds to those in their eighties. Two to four players can play the game. One of the four-player tokens, the one with the six compartments, is given to each player. On successful completion of the goal, one player will be designated as the coordinator, distributing the goal pegs. On the successful accomplishment of a goal by the player, the coordinator will hand out six-goal pegs, one in each colour, with the letters “W”, “F”, “L”, “M”, “H” and “FR” on them. Work is represented by W, Finance by F, Lifestyle by L, Mental by M, Health by H, and Family and Relationships by FR. The coordinator will be one of the participants and will only be responsible for handing out the pegs.

Already too many board games are disrupting the board games landscape. What are your thoughts?

There is always a requirement for quality products or games. If a game is made which is engaging as well as promotes learning new things, then sky’s the limit. The quality of the board games and the thought process behind this is unparalleled. There is no one even close to us in that sense. It doesn’t matter how crowded the landscape is; we will continue to dominate the market in this section.

Could you share how these board games have an educational connection apart from being entertaining?

A lot of thought has gone behind this. As I said earlier, I was setting goals. The system has been perfected with our GB (Gaurav Bhagat) goal planner which is a best seller with many of our clients and more, and that book has been converted into a game. That’s where the Lakshya game came from. It has a huge educational component, and children love it. The game has mental, health, lifestyle, finance, family and relationship goals and how it can be done in a fun way.

Since the time of the launch of these board games, how has been the response so far?

The board games were actually launched in early 2022, and its response has been fantastic. The corporate clients have picked up these games. A lot of friends and family members have also picked them up. This will only get bigger and better. In due course, we would like to take these games on a global level, too, especially in the markets of Dubai, Europe, and the USA as well.

Do you think the board games market is at saturation point?

Absolutely not; it is coming back ever stronger. It is a market that I have been following since I was 10. So, if we go back to the ’80s, I have been keeping an eye on this from then. It will only get bigger.

I have set lots of goals. Regarding board games, my goal is that The Stock Market will do 5,000 copies and Lakshya will probably do 8,000 copies in 2022.

From there on, it will only continue to grow 30 to 40 per cent every quarter. As we go into more and more board games, we at the Gaurav Bhagat Academy, intend to become a significant player in the board game market not only in India but around the world.