Valheim has surpassed 500,000 concurrent players on Steam in under three weeks. The viking-inspired survival title launched through Steam Early Access on 2 February and has sold over three million copies since its launch.

That initial success is further emphasised by the sheer number of people logging on to play the game, with Valheim amassing a peak of 502,387 concurrent players over the past 24 hours.

According to SteamDB, that means Valheim was the third-most-popular game on Steam when it hit the milestone. It’s also the fifth-highest all-time peak the platform has ever seen, behind PlayerUnknown’s Battlegrounds, Counter-Strike: Global Offensive, Dota 2, and Cyberpunk 2077. 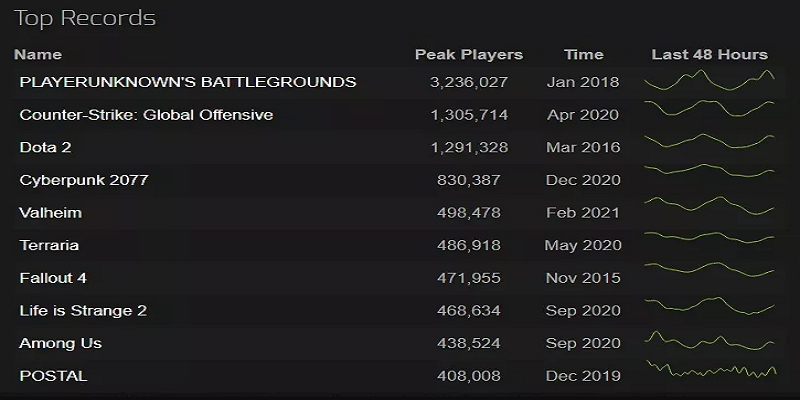 It’s going to be an uphill battle from here: the four records it beat were in the 400,000 range, but the next record is the 830,000-player record Cyberpunk 2077 set at its December launch. To beat Dota 2 and Counter-Strike, it’d have to cross 1.3 million players.

It seems completely doable, though, considering how rapidly the game has already grown, and the way it can suck you (and your friends) in again and again. There’s a huge randomly generated world to explore and loads to craft and build, with up to 10 people cooperatively working together. It’s fun, and with a remarkably shallow learning curve and a $20 price tag, I’d be surprised if it bottoms out anytime soon.