The Red Bull Campus Clutch, the global VALORANT university tournament is officially open, with 12 online and four offline qualifiers in India taking place from 20 February to 10 April. The competition challenges student gamers of all levels across the nation to team up, represent their campus, and compete on the world stage to create history for their university and their country. To enter the global event, students must rally up their team of five and register to compete across three phases: Qualifiers, National Finals and World Final.

A level playing field, Red Bull Campus Clutch is open to all students over 18 who are enrolled in universities across the nation. Teams of five can  sign up to compete for online and offline qualifiers at the official site

Successful teams will advance to the Semi Finals (online) on 14th April and National Finals on 24 April where the best student VALORANT team will advance to the World Final, where only the very best will face off to take home the ultimate glory. The stakes are high as national finalists will have  opportunity to compete at a World Final and battle the best student VALORANT players in the world, and on top of that win a cutting-edge gaming hub for their university. At the World Final, teams will face off for $24273, and an exclusive chance to see the biggest stars in VALORANT compete at the VALORANT Masters, the official stage of the Champions Tour esports structure.

The tournament in India will be launched through the Frag-Out, an exhibition match, which will be held on 13 February from 5pm to 9:30pm. This exhibition match will be played between two teams consisting of top streamers across the country including Ankit Panth to kick off Campus Clutch and spread awareness about the same. One of India’s most popular Counter-Strike gaming professionals, Red Bull Athlete Ankit ‘V3nom’ Panth has been a figure of inspiration for the gaming community for many years, while also being the face of Team Brutality. Top streamers and casters across the country like Antidote, 8-Bit Raven, Jonathan, Toxic Mavi, 8-Bit Mafia, HydraFlick, Snax Gaming, Xyaa Gaming, Soul Viper, K18 Gaming and Soul Xeref will join Ankit Panth for the Frag-Out this Saturday evening. Higin Esports is the execution partners for the Frag-Out. 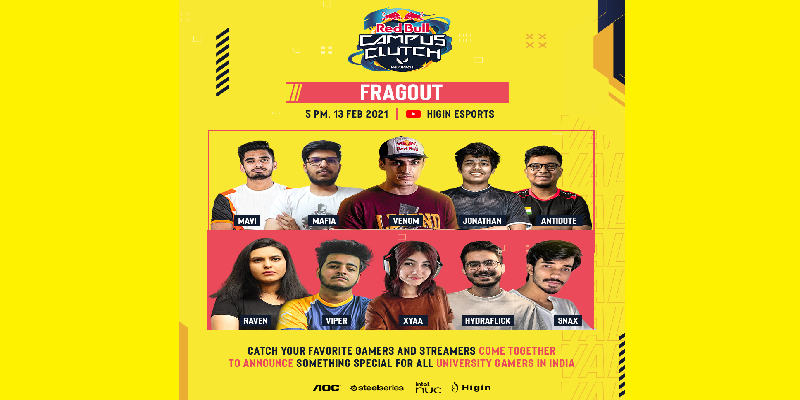 “We are delighted in partnering up with Red Bull to execute Red Bull Campus clutch in India, which takes us one step closer to our mission to grow Grassroot Esports. Unless India makes a structured effort to broad-base Esports & increase participation at the grassroots level, we will continue to lag in the global esports ecosystem. We will continue to focus on enhancing to grow Grassroot Esports through the Higin Collegiate Esports program,” Higin co-founder and COO Aditya Pol.

Teams from more than 50 countries will have the opportunity to compete against players from all over the world, hone their skills, and understand what it takes to compete professionally. Red Bull Campus Clutch is a new grassroots event that aims to take university esports to the next level by creating a global structure, inviting students to not only represent their campus, but their country, and pave the way for the next generation of esports pro players.