Nazara Technologies Limited has announced its un-audited Standalone and Consolidated results for the quarter and nine months ended 31 December 2021.

As of 31 December 2021, Nazara has diverse business segments with revenue generation accruing across gamified learning, Esports, freemium and telco subscriptions.

Key Consolidated Financial Highlights for 9MFY22 are as follows:

The Consolidated Revenue Mix across business segments stood as follows: 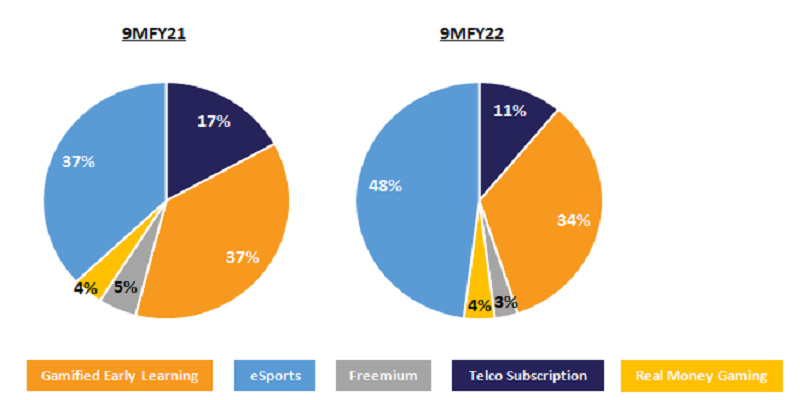 Esports segment has demonstrated 75 per cent growth in revenue as well as 71 per cent growth in EBITDA in the first 9MFY22 and has continued the YoY revenue growth momentum witnessed in FY 20-21 (102 per cent growth over FY20). eSports has witnessed 70 per cent revenue CAGR over the past three years. This segment now contributes the highest revenue in Nazara portfolio with 48 per cent contribution in 9MFY22 revenue vs 37 per cent in 9MFY21.

Gamified Early Learninggrew by 22 per cent in 9MFY22 over 9MFY21 and added net positive paying subscriber base in Q3.

Skill based Real Money Gaming grew by 53 per cent in 9MFY22 over 9MFY21 and delivered break even EBITDA in Q3 as against losses in previous quarters.

Overall, we are pleased with our growth in strategic areas of focus while maintaining healthy profitability and cash flows.We have witnessed 75 per cent YoY growth in the esports segment for 9MFY22 led by strong growth in revenue across all sub-segments in Nodwin and SportsKeeda. The addition of original IPs such as NH7 Weekender and expansion of our esports business into the Middle East via our acquisition of Publishme has further accelerated the growth momentum. Nazara’s strategy of having a diversified portfolio across business segments in gaming continues to provide us with a stable and strong platform on which we can continue to build future growth and success. Nazara continues to remain committed to building multiple growth levers across gamified learning, freemium, esports, and skill-based real money gaming via growth in its current portfolio and the addition of more offerings in the ‘Friends of Nazara’ network through strategic M&A.”