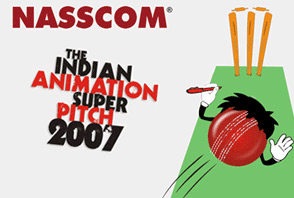 With just about two weeks to go, the turf’s getting hotter for the NASSCOM Animation & Gaming India 2007. Almost the entire Industry shall converge at Hyderabad’s Hi Tech City and participate at this annual event which is dedicated to issues and trends in the Indian Animation, VFX and Gaming space.

The unvieling of the Annual Animation & Gaming Industry report, the Big Ticket keynotes by Rajesh Sawhney, Ronnie Screwvala, Shiraz Akmal and Paul Steed as well as panel discussions by the Industry’s leading professionals and studio heads on topics such as Financing & Funds, Mobile Gaming Biz, Value Creation through VFX , 3D Feature Pipelines and India’s Regional Competitiveness amongst a host of other topics; and the networking opportunity are amongst the many reasons why most of the Industry is planning to be there at the event.

This year, in addition to all these attractions, the two biggest highlights and additions to the event are, the Gaming track which is a special track of discussions and presentations on the Gaming opportunity; and The Indian Animation Super Pitch 2007 which is an excercise and a contest aimed purely at fostering and encouraging original content creators in Indian animation.

Speaking to AnimationXpress.com, NASSCOM Regional Director Colonel S V Ramachandran shared,”For any business, owning of Intellectual Property is key to growth and moving up the value chain and much more acutely so in the case of Animation. We at NASSCOM have made it part of our focus and have created The Indian Animation Super Pitch 2007 in that direction”

“We had invited entries for The Super Pitch from across the Indian animation eco system and recieved 30 entries within a span of just 45 days. The 30 entries were than shortlisted by a select panel, which went through each entry meticulously judging it by more than 10 different criteria to finally and painfully select a short list of six final entries”

They are as follows :-

“The finalists have another two weeks time to further fine tune their Bibles and Pitches so that they can be at their very best at the Super Pitch. Mark my words, the Super Pitch is going to be so exciting that studios are going to start preparing a year in advance in order to participate” shared a visibly excited Colonel Ramachandran.

On being asked about the quality of the entries overall and as to what exactly the feedback from the jury that shortlisted the content was? Colonel shared that, “Nearly 60% of the entries sent had been thoroughly developed and with complete Bibles and definitions of Target Audience etc. The jury feedback on the entries sent is that the there was a close fight between at least 10 projects of which a final SIX had to be shortlisted”

“We are very encouraged that as we move armed with a spotlight, searching for talent that we can encourage, we have come across a lot of gems of work and I am sure the final jury as well as the delegates at the Summit shall be pleasantly surprised with the showing. There will be a good mix of Recognised studios as well as hidden and hitherto secrelty nurtured talent, slugging it out for The TITLE” he added.

“And I must say that, each of the entrants, whether shortlisted in the final six or not is a winner and we are thinking of ways and means as to how NASSCOM can encourage and support even those participants that were good but did not make it to the final six” concluded Colonel Ramachandran.

So as all eyes stay glued for the Super Pitch updates and as January 10 nears…..