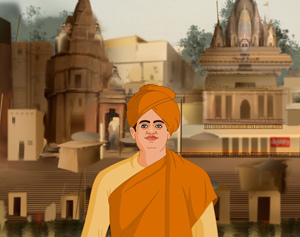 In what we can call a series of religious animation movies, Bangalore based Mediateck will soon be releasing another movie based on Swami Vivekanandâ€?s life. The 65 minutes movie will be completed soon and is slated to be released in second week of February â€?07 in the Home Video format.

The movie is developed in Flash and 2D animation. Speaking about the storyline of the movie, Mediateck M.D., Balakrishna Maddur shared with AnimationXpress.com, “Swami Vivekanand’s inspiring personality was well known both in India and in America during the last decade of the nineteenth century and the first decade of the twentieth. The unknown monk of India suddenly leapt into fame at the Parliament of Religions held in Chicago in 1893, at which he represented Hinduism.”

Balakrishna further elaborated, “His vast knowledge of Eastern and Western culture as well as his deep spiritual insight, fervid eloquence, brilliant conversation, broad human sympathy, colourful personality, and handsome figure made an irresistible appeal to the many in general and in particular Americans who came in contact with him. People who saw or heard Vivekananda even once still cherish his memory after a lapse of more than half a century.”

A team of 40-45 professionals has worked on this film for five months. The team includes Pre-production artists, Production Artists, Animators, Compositors, Professional Voice Artists like C.R.Simha and his troupe. Project Direction is done by M.R.Balakrishna and Creative Direction by C.Manjunath.

Talking about the challenges faced while the making of this movie, Balakrishna said, “The biggest challenge was the authenticity of the contents and the visuals as the movie is based on the life of Swami Vivekananda. Picturising the principles and philosophy without fantasy is another great challenge. Team at Mediateck has developed this movie with greater professionalism.”

The movie has been made for Sri Ramakrishna Mutt with a message to youth â€?Arise, Awake till you reach the Goalâ€?

“All possible efforts are made to ensure that the authenticity of the contents is maintained. Film conveys the message of the Great Indian Saint Swami Vivekananda in the form of various events that occurred during the period of his life in a simple way”, concluded Balakrishna.