Noorul Abzar from India overcame a tough challenge from the rest of the field and displayed exemplary skills to emerge among the winners of the inaugural edition of the ‘Apollo Tyres United League’. The hugely competitive field at the tournament comprised of over 2 million participants from multiple regions with about 40per cent of them from India, indicative of the growing popularity of esports in the country. 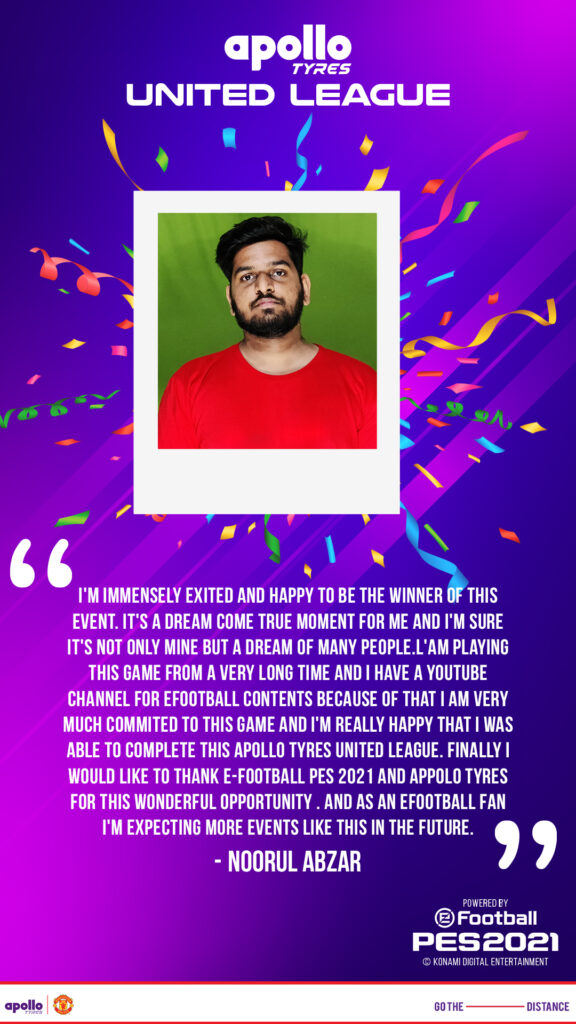 India’s Noorul, who hails from Aluva in Kerala, along with Diaa Muhammed Nasr of Egypt and Mohammad Shifat Al Maruf of Bangladesh were crowned the champions of the tournament across the three different categories, with all three taking home the coveted crown and the grand prize of an all-expenses paid trip to Old Trafford that includes a matchday experience at the hallowed stadium.

Leading tyre maker, Apollo Tyres and global video game publisher KONAMI, in association with Manchester United, had earlier launched the Apollo Tyres United League, an esports tournament played on eFootball PES 2021 for mobile. The mobile-based esports tournament was held across multiple regions — India, Australia, South Africa, Middle East, South East Asia, Sri Lanka and Nepal — and was the first-of-its-kind both in terms of the format of the tournament and the overall partnership.

Apollo Tyres is the Global Tyre Partner of Manchester United Football Club and KONAMI is the official video game partner of the iconic English Football Club, and this is the first time that Apollo Tyres has conducted an initiative of this scale for esports.

“It has been exciting to see the massive participation at the debut edition of the Apollo Tyres United League. The talent on offer in the eSports arena has really been impressive right through the tournament and was great to see an Indian among the winners list. This has been our first foray in the eSports domain and looking at the response, we will certainly be looking forward for a deeper connect with the growing popularity of eSport.”, said Apollo Tyres Ltd president, Asia Pacific, Middle East & Africa (APMEA) Satish Sharma.

Manchester United’s director of partnerships, Sean Jefferson comments, “Everyone at Manchester United congratulates the three champions on winning the first Apollo Tyres United League. The Club recognizes the popularity of esports and is very proud of our own esports team, so we are delighted to support this collaboration between our two global partners, Apollo and Konami. With over two million participants, this innovative and exciting campaign has captured the imagination of our fans and we look forward to developing further fan engagement initiatives that work so well for our fans and our partners.”

In India alone, it is estimated that there are more than 150,000 esports participants with a viewership of over 17 million people and these numbers are set to grow exponentially over the next few years. KONAMI’s eFootball series, which was the gaming title for Apollo Tyres United League, has a long history of supporting eSports in the region, with PES 2018 featured in the 2018 Asian Games.